Ali Sardar Zafri was among the votaries of the progressive movement in Urdu literature. Know more about his life in this biography.
Home : Indian Literature : Urdu : Poets : Ali Sardar Zafri 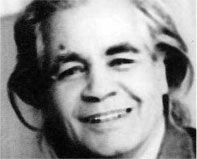 Ali Sardar Zafri was born in Balrampur, Uttar Pradesh. He came to Mumbai in 1942 and made it his home. Arrested for writing against British rule in India, Zafri was among the votaries of the progressive movement in Urdu literature. Zafri 's literary career began at the young age of 17. His major influences were Josh Malihabadi, Jigar Moradabadi and Firaq Gorakhpuri. He has written nine books of verse, two plays, one memoir-reportage, three collections of critical essays and one volume of short stories. With the publication of his very first collection of Nazam and Ghazal, Parwaz, in 1943, he established himself as a poet to reckon with. To know more about Zafri, continue to read this insightful biography on him.

Personal Life
Zafri adopted communist ideology at Aligargh Muslim University. This is why he was expelled from the university and was told instead that it was for some 'political reasons'. He then got admission in Zakir Husain College in Delhi University, Delhi from where he graduated in the year of 1938. He was arrested in 1940 for expressing his anti-war perspective in the form of poems. It was because of his arrest that he could not finish his post-graduate studies from the Lucknow University.

Major Work
Zafri's first collection of short stories is called Manzil, which was published in 1938. Another set of poems called the Parvaz was published in 1944. Due to his early literary accomplishments, he was made to chair the Progressive Writers' Movement in Lucknow. Progressive Writer's Movement came out with a literary journal in the year of 1939, which was called Naya Adab. He was very active in political and literary scenario of India in those years. This is the reason why he was arrested in the year of 1949 in Bhiwandi. He was arrested because he organized a Progressive Urdu Writers' Conference, even after continuous warnings from the chief minister of Bombay of that time. Morarji Desai.He was a great urdu lyricist of those times. His popular work includes Dharti Ke Lal and Pardesi.

Poetry: Zafri's poerty collection like: Nai Duniya Ko Salaam, Khoon Ki Lakeer, Amn Ka Sitara, Pattar Ki Deewar, Asia Jaag Utha, etc. was published in the time span between 1948 to 1978. It was considered to be an unconventional, longish Nazam brimming with revolutionary optimism; it took the Urdu world by pleasant surprise. Sardar had by then become a familiar and revered name. Among his other poetic works Khoon Ki Lakeer (1949), Asia Jaag Uttha (1951), Patthar Ki Deewar (1953), Pairahan-e-Sharar (1966), Lahoo Pukarta Hai (1978) and November, Mera Gahwara (1998) is remarkable, both for their theme and style. Sardar's early works reflected a restless yearning for India's independence from the colonial yoke. Equally intense was his yearning for the freedom and dignity of the proletariat. This was because of the strong impact of the Progressive Writers' Movement inspired by Marxism. His last work, an athology, called Sarhad is of a lot of historical importance. It is because in the year of 1999, prime minister of India Atal Bihari Vajpayee carried it along with himself during his bus journey to Lahore, Pakistan. He was not able to accompany Mr. Vajpayee because of his ill health; otherwise he was cordially invited to escort him to the event of such historical nature. When Atal Bihari Vajpayee reached Pakistan, he presented Sarhad to the then leadet of Pakistan, Nawab Sharif. It happened during the Lahore Summit, 20-21 Feburary 1999. This particular work of his is also converted into an album by Anil Sehgal and is sung by Seema Anil Sehgal (also known as Bulbul-e-Kashmir).

Other Works: In the course of his writing career, he has also done some major editing work, mainly editing of anthologies, like: Meera Bia, Ghalib, Mir, Kabir, etc. he has written his own prologue to the well known works by these historically famous and acclaimed writers. He was also a playwright; he wrote two plays for Indian People's Theatre Association, also known as IPTA. He was also the producer of two television series called the Runaway Success and Kahkashan. These serials were dedicated to the lives and works of acclaimed Urdu writers of the 20th century. He was personally familiar to these writers: Faiz Ahmad Faiz, Firaq Gorakhpuri, Josh Malihabadi, Majaz, Hasrat Mohani, Makhdoom Mohiuddin and Jigar Moradabadi. He also took the responsibility of being the editor and publisher of the most popular Urdu magazines of the Indian sub-continent called Guftagu.

Accolades
The principal theme of his poetry was compassion, love, perseverance and sensitivity surviving amidst the callous inhumanity of our times. In his unique style, he depicted the exemplary survival of the human spirit in face of all-pervasive adversity and defeatism. He was awarded the Iqbal Gold Medal by the Pakistan government in 1978. In India, he was awarded the prestigious Jnanpith Award in 1998. His memorable work, Ek Khwab Aur, received the Sahitya Akademi award. Ali Sardar Zafri died of prolonged illness in the year 2000.