Nida Fazli is is an eminent Urdu poet and lyricist. Know more about his life in this brief biography.
Home : Indian Literature : Urdu : Poets : Nida Fazli 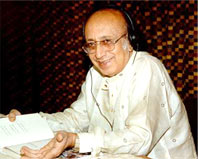 Muqtida Hasan Nida Fazli, born in 1938 in Delhi, is an eminent Urdu poet and lyricist. His poetry is often described as lacking in any singular identity thereby defying neat categorizations. His poetry reflects the checkered trajectories of a poet who "traveled in many directions". His poetry uses both village and urban landscapes to explore nature and human relations. Influenced by the events surrounding Partition, his poetic spirit is still out in search of his home and his nation returning to the theme of expecting the impossible unity of the soldiers on opposite sides of the Indo-Pak border. To know more about Fazli, continue to read this insightful biography on him.

Personal Life
Fazli is an Indian poet who responds to the tragic present of South Asia with a rare sensitivity. It is said that the inspiration to write poetries generated in Fazli when once in his young times he passed by a Hindu temple and heard the priest singing a bhajan from Surdas' compositions, about Meera and her eternal love for lord Krishna. It was a bhajan full of sorrow and longing. The beauty of it inspired Fazli as it got him introspecting the beautiful bond between human beings that connects them on such a deep emotional level. He studies Ghalib and Mir thoroughly but found that knowledge limited, therefore, he extended his knowledge to other writers like Meera, Kabir, etc. and then started studying world renowned poets like T.S. Eliot, Gogol, Anton Chekhov, Takasaki, etc.

Major Work
Nida Fazli has received various awards including Khusro Award, Best Poetry Award from Maharashtra Urdu Academy, Hindi Urdu Sangam Award and Sahitya Akademi Award in 1998. In order to make a living, Fazli moved to Bombay in the year of 1964. His poetic writing was much appreciated by filmmakers and scriptwriters and therefore, he started being invited to mushairas and all kinds of poetry recitations. He started getting famous for his colloquial style of writing in Hindi and Urdu language. He has written songs for movies like Sur, Aap Toh Aise Na The, Sarfarosh, Gudiya, Iss Raat Ki Subah Nahi, etc. He has been contributing his critical essays to BBC Hindi on the topics of literature and contemporary issues.

English Translation:
There is no happiness now, neither there is anyone left in my life that can make me cry,
I have accepted the ways of the world and life

I have got this unidentified hope from my life
Everywhere I look I feel like you are about to show your face to me again.

English Translation:
Everywhere and in every direction, there are several men
Even then a man is a victim of his own loneliness and silences

The fate of a man is not fixed; it changes with each phase in life
This is what makes a man restless till his last breath.

English Translation:
I cannot take my pain anywhere else now
I have to sort this house out since everything is messed in here

There is a proper protocol to do everything in this world, even to visit a garden
You should not force the butterfly to leave the flower and fly away

You do not have to go too far from your house to do something noble
If you find someone in need, help him.