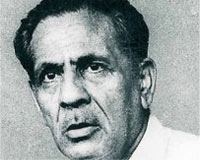 Firaq Gorakhpuri was born Raghupati Sahay in the year 1896 at Gorakhpur District of Eastern Uttar Pradesh. Born to a family of aristocrats, Firaq had a taste of Urdu poetry at very tender age. He started writing poetry in Urdu in teens and developed his own niche in an era that was marked by the likes of Sahir, Iqbal, Faiz and Kaifi. Although a left leaning intellectual, Firaq was never an active member of 'Indian Progressive Writers Association'. Firaq's father, Munshi Gorakh Prasad, practiced law but side by side used to write Urdu poetry as well. Firaq's father's pen name for his poetry was 'Ibrat'. It was natural for Firaq to be drawn towards the creative and literary side of life. To know more about Firaq, continue to read this insightful biography on him.

Personal Life
Firaq was a Master's degree holder in the field of Urdu, Persion and English literature. He was married off at a very tender and young age. He was only 18 years old when he was forced to tie marital knots with Kishori Devi. It was a through and through unhappy marriage and there was always much tension between the husband and wife; were popular for their tiffs in the literary world, amongst Firaq's literary friends.

After a brilliant academic career he was selected into the Provincial Civil Service but resigned and joined Allahabad University as a lecturer in English. He was also a part of Mahatama Gandhi's Non-cooperation movement for which he was sent to the prison for some time. It was In Allahbad University that he wrote most of his Urdu poetry and his masterpiece 'Gul-e-ra'naa' that fetched him the Jnanpith Award, the most prestigious literary award of India. He was also honored with Sahitya Akademi Award in Urdu language literature's category in the year of 1960. He started adding pen name Firaq Gorakhpuri as traditional of the then poets. He served as a Research Professor at the University Grants Commission and also held the position of Producer Emeritus in All India Radio.

Firaq had been a champion of secularism all his life. He was a chief crusader against the government's effort to brand Urdu as the language of Muslim. He was also instrumental in the allocation of funds for the promotion of the language. Jawahar Lal Nehru nominated him as the member of Rajya Sabha for his efforts in the promotion of literature and communal harmony. In his career spanning more than 50 years, Firaq wrote hundreds of heart wrenching poetries. It included collections such as Rooh-o-Qaayanat, Gul-e-Ra'naa and Nagma-numaa. This great nationalist passed away in 1982 after prolonged illness.

Major Work
Firaq's poetry showed the influences of famous Urdu poets like Mir and Momin on his personality and writing. He was very well familiar with the Urdu poetic Tradition. He was also influenced and impressed by the romanticism of the English literature, especially the English poetry. He was also much persuaded by the literary power of the ancient Hindi and Sanskrit literature. This is the reason why his poetry reflected a unique essence. Firaq was also famous for his liberal use of sensuality and frank description of women's body. Although he more or less belonged to the conservation thoughts and expressions of the Urdu literature but he openly expressed his emotions and thoughts on platonic and physical love. But his writing has never been vulgar or crude; he always treated the bold part of his poetry very tastefully and tenderly. He used to write from a point of view of a lover and compared the beauty of the woman with the beauty of the nature. He used to unify love and passion in his poems; according to him unifying of the bodies of a man and a woman is important for their love to flourish and be taken to the depths of emotions. He considered the coming together of two bodies and spirits in love brings eternal divine happiness to the lovers. He blended Urdu poetic diction with Hindi and made it understandable to the general people of India.

Ali Sardar Hafri, a famous Urdu writer from India, appreciated the work of Firaq and in doing so said that, 'he is a poet of sensuous beauty, and an adept in depicting the psychological states of a lover. He has an authentic, individual voice, and a delightful way of using the language.'

English Translation
Nobody has ever belonged to someone for a whole lifetime
You cannot own someone
The beauty that you see with your eyes and the love that you feel
Are only the illusions of the mind
All my life I have tried to save myself from
The glances of your eyes
Even then I failed and the dagger went
Right through me.