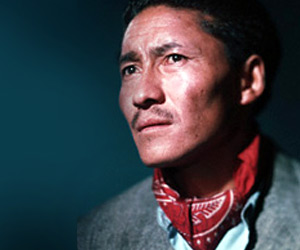 Born: May 29, 1914
Died: May 9, 1986
Achievements: Tenzing Norgay became the first man along with Edmund Hillary to reach the summit of Mount Everest

Tenzing Norgay was a Nepalese Sherpa mountaineer. Tenzing Norgay created history on May 29, 1953, when he and Sir Edmund Hillary became the first men to conquer Mount Everest.

Tenzing Norgay was born in Tshechu, presently in Tibet Autonomous Region, China. He grew up in peasant family in Khumbu in Nepal. His exact date of birth is not known but it is believed that was born in late May and later on he decided to celebrate May 29 as his birthday, as this was the date he climbed Everest. Tenzing Norgay's original name was Namgyal Wangdi, but as a child his name was changed on the advice of a lama. Norgay means fortunate. Tenzing Norgay ran away to Kathmandu twice as a boy, and eventually settled in the Sherpa community in Too Song Bhusti in Darjeeling, West Bengal, India.

Tenzing Norgay took part as a high-altitude porter in three official British attempts to climb Everest from the northern Tibetan side in the 1930s. He also took part in other climbs in various parts of the Indian subcontinent. He scaled Nanda Devi, which he described as the most difficult climb he ever took. In 1947, he took part in an unsuccessful Everest attempt. The attempt ended when a strong storm at 22,000 feet pounded them.

In 1952, Tenzing Norgay took part in two Swiss expeditions led by Raymond Lambert, the first serious attempt to climb Everest from the southern Nepalese side, during which he and Lambert reached the then record height of 8,599 m (28,215 ft).

In 1953, Tenzing Norgay took part in Sir John Hunt's expedition. This was his seventh expedition to Everest. During this expedition he and Sir Edmund Hillary became the first men to reach the summit.

Conquering of Everest brought great adulation to Tenzing Norgay in India and Nepal. He was even worshipped by some people who believed him to be an incarnation of Buddha or Lord Shiva. Tenzing Norgay later became director of field training for the Himalayan Mountaineering Institute in Darjeeling. In 1978, he founded a company, Tenzing Norgay Adventures that offers trekking in the Himalayas.

Tenzing Norgay married thrice. His first wife, Dawa Phuti, died young in 1944. He had two daughter from his first marriage. His second wife was Ang Lahmu, a cousin of his first wife. They had no children. Tenzing Norgay had his third marriage while his second wife was still alive, as allowed by Sherpa custom. He had a son named Jamling from this marriage. Jamling Norgay presently looks after the adventure company founded by his father.

Tenzing Norgay died on May 9, 1986 in Darjeeling, West Bengal.