Sunita Williams is an American astronaut and United States Navy officer who holds the record for total spacewalks by a woman. Check out this biography to know about her childhood, life, achievements, works & timeline.
Home : Famous Indians : Others : Sunita Williams Biography 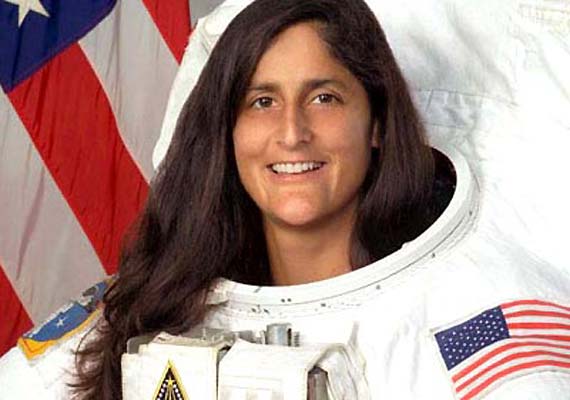 Sunita Williams is an American astronaut and United States Navy officer who holds the record for total spacewalks by a woman. As of November 2012, she had made seven spacewalks totaling 50 hours and 40 minutes, making her one of the most experienced spacewalkers. She also holds the record for most spacewalk time for a woman. Born as the daughter of a prominent neuroanatomist in Ohio, Sunita set her aims high while still a young girl. She studied at the United States Naval Academy at Annapolis, Maryland before furthering her education at Florida Institute of Technology. Her career began in 1987 when she was commissioned an ensign in the United States Navy. She quickly rose through the ranks and soon began training at the U.S. Naval Test Pilot School. During her stint as a naval test pilot and later, test pilot instructor, she flew more than 30 different aircraft and logged more than 2,770 flight hours. Then she was selected by NASA for the astronaut program and underwent her Astronaut Candidate training at the Johnson Space Center before embarking on an illustrious career as an astronaut. She worked in Moscow with the Russian Space Agency for a while before going on her first space mission.

Childhood & Early Life
She was born as Sunita Pandya to Indian American Deepak Pandya and Slovene American Ursuline Bonnie in Euclid, Ohio, as the youngest of their three children. Her father is a prominent neuroanatomist. After graduating from Needham High School in Needham, Massachusetts, in 1983, she entered the United States Naval Academy in Annapolis, Maryland, and received her Bachelor of Science degree in physical science in 1987.

Military Career
Upon her graduation she was made an ensign in the United States Navy in 1987. After spending the next few months on a temporary assignment at the Naval Coastal System, she reported for aviator training at the Naval Aviation Training Command where she was designated a Naval Aviator in July 1989. She began her initial H-46 Sea Knight training in Helicopter Combat Support Squadron 3 (HC-3) following which she was assigned to Helicopter Combat Support Squadron 8 (HC-8) in Norfolk, Virginia. The Persian Gulf War broke out in 1990, and she flew in helicopter support squadrons during the preparations for the war, and also served in the Operation Desert Shield and Operation Provide Comfort. When the devastating Hurricane Andrew hit The Bahamas, South Florida, Louisiana, and other areas of the Southern United States, Williams served as the Officer-in-Charge of an H-46 detachment sent to Miami, Florida, for the relief operations aboard the USS Sylvania. After a few months she started training at the U.S. Naval Test Pilot School. The course began in January 1993 and she graduated in December the same year.

As a naval test pilot she was first assigned to the Rotary Wing Aircraft Test Directorate as an H-46 Project Officer and V-22 chase pilot in the T-2. Over the next several months she served as the squadron Safety Officer and flew test flights in the SH-60B/F, UH-1, AH-1W, SH-2, VH-3, H-46, CH-53, and the H-57. She went back to the Naval Test Pilot School as an instructor in the Rotary Wing Department in December 1995, and also took on the addition responsibility of being the school's Safety Officer. After gaining experience in flying the UH-60, OH-6, and the OH-58, Williams was sent to the USS Saipan as the Aircraft Handler and the Assistant Air Boss. Meanwhile she also completed an M.S. in engineering management from the Florida Institute of Technology, in 1995.

Career at the NASA
Sunita Williams was selected for the astronaut program by NASA in June 1998. She underwent rigorous training which included numerous scientific and technical briefings, intensive instruction in shuttle and International Space Station (ISS) systems, and physiological training. After a period of intensive training she was sent to Moscow to work with the Russian Space Agency on the Russian contribution to the space station and with the first Expedition Crew.

She flew aboard the space shuttle Discovery on the STS-116 mission to the ISS in December 2006. She made four space walks, totaling more than 29 hours outside the spacecraft, and spent a total of more than 195 days in space before returning to Edwards Air Force Base in California with the crew of STS-117 in June 2007. She flew to the ISS again in July 2012, as a flight engineer on Expedition 32. She became the commander of Expedition 33 in September 2012, and made three more spacewalks totaling more than 21 hours during this mission. She created history by completing a triathlon in orbit by using a treadmill, coinciding with the Nautica Malibu Triathlon held in Southern California on Earth. She spent nearly 127 days in space before returning to Earth in November 2012. In 2015 Williams was selected as one of the four astronauts to make the first test flights in NASA's Commercial Crew program. Flights are scheduled to begin in 2017.

Awards & Honors
Sunita Williams has received numerous awards and honors for her achievements. She has been decorated with the Navy Commendation Medal and National Defense Service Medal twice and is also the recipient of the Navy and Marine Corps Achievement Medal. The Government of India honored her with the Padma Bhushan in 2008 for her contribution to Science and Engineering.

Personal Life
Sunita Williams is married to Michael J. Williams, a Federal police officer in Oregon. She is a fitness freak and loves running, swimming, biking, triathlons, windsurfing, and snowboarding. Williams is also well-known for her devotion towards Hindu Lord Ganesha.

Timeline
1965: Born in Euclid, Ohio
1983: Graduated from Needham High School
1987: Received a Bachelor of Science degree from the United States Naval Academy and made an ensign in the United States Navy
1989: Began combat helicopter training
1992: Served in relief mission during Hurricane Andrew
1995: Received a Master of Science degree in Engineering Management from Florida Institute of Technology
1998: Entered astronaut training
2006: Flew aboard the space shuttle Discovery on the STS-116 mission to the ISS
2012: Participated in Expedition 32/33