Here is given the biography of Mira Bai, a Hindu mystical poetess. Read the life history of brahmacharini Meerabai.
Home : Famous Indians : Others : Mirabai 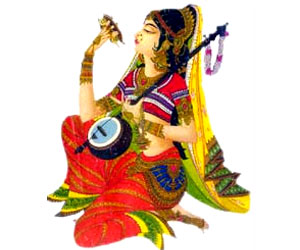 Mirabai was a well known Hindu mystical poetess, whose writings are praised all over. It is said that, she was a disciple of Shri Guru Ravidas. She is famous for her bhajan compositions. She wrote nearly 1300 prayer songs. Most of her compositions were written in the praise of Lord Krishna. She wrote most of the poems in the Rajasthani dialect of Hindi. Well, in this article, we will present you with the biography of Mirabai.

Mirabai was born in the year 1498 at Merta in Nagaur District of Rajasthan. When she was just six years old, her mother gave her an image of Krishna, with whom she would talk every day and night. Krishna became an integral part of Meera's life. When Mira turned sixteen, her paternal uncle Viram Deo fixed her marriage with the eldest son of Rana Sanga of Chittor, Prince Bhoj Raj. To know the life history of Mira Bai, read on.

As the wife of the ruler of Chittor, she earned status and recognition. Now, she became a part of a royal family blessed with riches. Despite the fact that, she was a married woman, she could not stop thinking about Krishna. Her immense love for Krishna did not let her perform her duties towards her marital relationship. She even refused to offer prayers to the family deity, Durga.

Mirabai used to intermingle with people of all social classes and castes. Then, she would go around singing and dancing in the public temples. It is due to this reason that, she had to face serious consequences. Her husband died couple of years after their wedding knots were tied. Following her husband's death, she was asked to perform Sati, a custom of self-immolation that is practiced by all Hindu widows.

Mirabai lost her father in a battle. Even, her father-in-law was severely injured in the battle and expired the next year. In her writings, Meerabai made a mention that her in-laws attempted to kill her twice. However, by God's grace, she was saved. It was getting very tough for Mira to tolerate all these sufferings. At the age of thirty, she decided to leave the palace. She went on a pilgrimage trip to Mathura, Vrindavan and Dwarka.

Mira got so engrossed in worshipping Krishna that she virtually forgot herself. She left behind the treasure of her writings, which were a reflection of her heart. Her poems and other compositions reveal different aspects of her life. The prayer songs that she left are popular amongst the worshippers even today. Mirabai is considered to be a saint as per the tradition of the Bhakti Movement. The Bhakti Movement of the 16th century emphasized on devotion as the means to attain salvation.

There is an interesting legend associated with the story of Brahmacharini Meerabai. People are of the belief that, it was the unconditional immense love of Mira for Krishna that she vanished in the temple of Krishna in Dwarka. It is said that, the sanctum doors got closed on their own. Later on, when the doors were opened, Mira's sari was found wrapped around the image of Lord Krishna, thus speaking of the union of Mirabai and Krishna.