Shakuntala Devi, nicknamed 'human computer', was known for her extraordinary mathematical acumen. Go through this biography to acquaint yourself with her profile, childhood, and life and achievements
Home : Famous Indians : Others : Shakuntala Devi 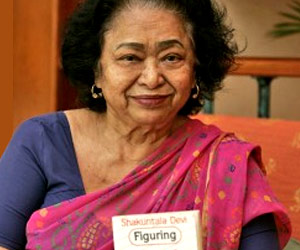 Very few people around the world achieved what this wonder-woman did. A mathematical prodigy, also known as the 'human computer', Shakuntala Devi was known for her complex problem-solving skills without the aid of any mechanical device. During her early years, she shot to fame by mentally calculating one of the toughest mathematical multiplications 10 seconds before the fastest and the most efficient computer of the time. Her problem-solving prowess came to the limelight with her performances at various institutions where she answered complex mathematical questions with great ease. She soon rose to prominence for her adept calculations and her confident demeanor. According to many sources, this famous prodigy met Albert Einstein and even he was taken aback by this acclaimed genius' skills. She was able to answer all of his challenging mathematical problems, prompting him to call her a "Mathematical Wizard". Apart from being an unparalleled mathematician, Devi was also an astrologer, activist and a prolific writer, whose works went on to inspire millions of people. Some of her best-known works are 'Figuring: the Joy of Numbers', 'Astrology for You', 'Perfect Murder' and 'The World of Homosexuals'. Scroll further for more information on this intriguing personality.

Shakuntala Devi was born on November 4, 1929 in Bengaluru to an orthodox, Brahmin Kannadiga family. Her father refused to become a priest and instead, wanted to entertain others as a tight-rope walker. He thus became a circus artist and 3-year-old Shakuntala used to accompany him to the circus and often come back mesmerized with her father's performances. It was he who eventually introduced her to the world of mathematics and taught her interesting card tricks that initiated her love for numbers. News of her ability to solve difficult mathematical problems soon spread like wildfire and she enthralled audiences with her wit and card-tricks, while her father entertained them with rope-walking. By the age of 6, she had her first major show at the University of Mysore where she displayed her mathematical prowess by solving arithmetical problems, mental math questions and finding out complex square roots and cube roots within a few seconds. After a few more similar performances in a number of other institutes, she found success at Annamalai University at the age of 8, when she was finally acknowledged as a 'child prodigy'.

Shakuntala Devi went for tours around the world through the 50s and performed in a number of institutions, theaters and even appeared on television. On September 27, 1973, she appeared on the BBC show, 'Nationwide' with the popular Bob Wellings, who was stunned when she managed give the right answers to all the mathematical questions that he bombarded her with. Gradually, her skills and her fan-following grew substantially. In 1977, she received a standing ovation from an audience of erudite mathematicians, when she gave the answer of the 23rd root of a 201-digit number in 50 seconds. The most powerful computer at the time, took exactly 62 seconds.

Unlike many other child prodigies, her mathematical skills did not wane in her teenage and adult years. Back home, word spread that a young girl captivated audiences with her adept mathematical skills and Devi soon became extremely famous in India as well. Thereafter, she was invited to the Imperial College, London, on June 18, 1980, where she answered a challenging problem in just a few seconds leaving the audience baffled. The fame of this 16-year-old whiz-kid grew manifold when she beat one of the world's fastest computers by 10 seconds, while multiplying two 13-digit numbers in 28 seconds.

Shakuntala Devi married Paritosh Banerjee, an IAS officer from Kolkata, in the mid-1960s. The couple however, separated in 1979 and she returned to Bangalore with her daughter during the 80s. She soon began offering astrological advice to countless people, including celebrities and politicians. Towards the end of her life, Devi grew frail and was admitted to various hospitals of Bangalore, countless times. She was admitted to Bangalore Hospital on April 3 after she complained of respiratory problems. Her health soon began to deteriorate after her kidneys failed and she breathed her last on April 21, 2013. She is survived by her daughter, son-in-law and two grand-children. She set up 'Educational Foundation Public Trust' to promote mathematical, astrological and philosophical studies in Bangalore.