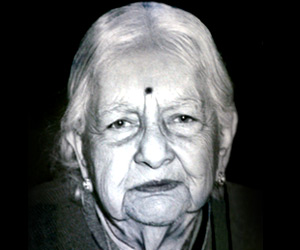 Born - 3 April 1903
Died - 29 October 1988
Achievements - Kamaladevi Chattopadhyay was person of many parts. She was freedom fighter, social activist, actor, politician, etc all rolled into one. But above everything, she is remembered for her phenomenal role in reviving the traditional handicrafts of India during the post independence era.

Kamaladevi Chattopadhyay was a woman of many parts - a freedom fighter, social activist and actor to name a few. She was born in a Saraswat family on 3 April 1903. But above everything, she is remembered for her phenomenal role in reviving the traditional handicrafts of India during the post independence era. Read on to know more about the life history of Kamaladevi Chattopadhyay, whose father was the district collector of Mangalore, whereas her mother hailed from one of the wealthiest families of Karnataka.

Belonging from an illustrious family, she got ample opportunity to meet the great freedom fighters and intellectuals of her time like Mahadev Govind Ranade, Gopal Krishna Gokhale and Annie Besant, who being friends of her parents visited her home frequently. Such acquaintances bore great influence on Kamaladevi Chattopadhyay, who became an early supporter of the nations' swadeshi mission. She married at 14 and widowed two years later while still in school. Yet she went on to take up acting which was considered inapt for women in those days.

The life history of Kamaladevi Chattopadhyay went on and she next wedded the poet-playwright brother Harindranath Chattopadhyay of the great poetess, Sarojini Naidu in 1920. After this, she also acted in two silent movies. Later she shifted to London with her husband, where she enrolled into the Bedford College to study sociology. But the couple returned to India to participate in the nation-wide non-cooperation movement launched by Gandhiji in 1923. Thereafter, Kamaladevi joined the Seva Dal established to work for social upliftment of the downtrodden.

Though she contested for a seat in the Madras Provincial Legislative Assembly in 1926, she lost by only 200 votes. Kamaladevi Chattopadhyay was appointed the president of the Congress Socialist Party in 1936, when she availed the chance to work alongside Jayaprakash Narayan, Ram Manohar Lohia and Minoo Masani. When the World War II broke out, Kamaladevi was in England and she soon started a world tour to voice India's situation to other countries and gather support for its Independence after the war.