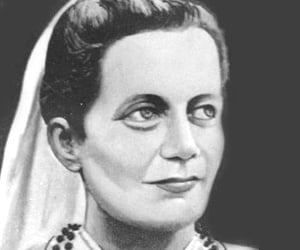 Born as Margaret Elizabeth Noble, she was more popularly known as sister Nivedita. She was an Anglo-Irish social worker, who was one amongst the many disciples of Swami Vivekananda. She came across Swami Vivekananda in the year 1895 in London. It was the Swami, who called her by the name "Nivedita". The word Nivedita is used to refer to someone who is highly dedicated to the almighty God. Well, in this article, we will present you with the biography of Sister Nivedita, who has made a niche for herself in the arena of spirituality.

Early Life
She came into this world on October 28, 1867. She was born in Ireland as the daughter of Mary Isabel and Samuel Richmond Noble. Her father always taught her that, service to mankind is the true service to God. His words made an impression on Nivedita's mind. She was very fond of music and art. After completing her education, she took up the job of a teacher and worked there for a long period of ten consecutive years from 1884 to 1894.

She had the caliber to impart education and inspire others. From the very beginning, she was a very zealous child, who was always full of energy and enthusiasm. At an early age of eight, she had the realization that, religion is not about having belief in the Doctrines, but it is about searching for the divine light that will bring enlightenment. To know the complete life history of Sister Nivedita, read on.

Meeting Swami Vivekananda
She began taking interest in the Buddhism principles. It is during this time that she met Swami Vivekananda, a great Hindu monk. Swami Vivekanand stressed on the fact that, it is the ignorance, selfishness and greed that pave way for our sufferings. His principles and teachings had an imprint on her mind and heart and this brought about a major change in the way she lived her life. He was the one who inspired her to do something for the welfare of the women of India.

Seeing the fire and passion in her to transform the society, Swami could foresee her futuristic role as Mother India. Nivedita began practicing meditation. There were basically two things in her mind that she sincerely followed; one being the search for enlightenment by realizing the eternal truth and the other was the welfare of the world. She left all the things that she could have boasted of and decided to lead a very simplistic life.

Works
In the year 1898, Sister Nivedita established a school for girls, who were deprived of even basic education. She was instrumental in various altruistic activities. Her aim was to bring about an improvement in the lives of Indian women belonging to various social classes and castes. She tried to bridge the gap and put an end to the caste distinctions.

She had good relations with many intellectuals of the Bengali community such as Rabindranath Tagore, the famous Nobel laureate writer. During the later years of her life, she engaged in activities that promoted and brought forth the cause of India's Independence. Her writings expressed her pan-Indian nationalist views.

She was a motivating force for people in all walks of life. Her lectures and various discourses gave people, direction on how to lead their lives. Throughout her life, she worked hard for serving the people and society at large. This started having adverse effects on her health. Finally, this great soul left for her heavenly abode on October 13, 1911.