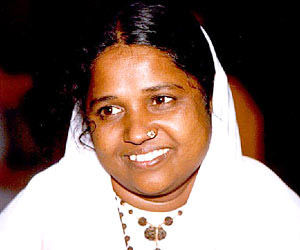 Mata Amritanandamayi is a great spiritual leader, who is affectionately known as 'Amma' by her followers. People have a lot of reverence for her. She was born as Sudhamani on 27th September1953 in a small village of Parayakadavu. Also called the "hugging saint" by the people, she is a wonderful woman with a beautiful soul. Well, in this article, we will present you with the biography of Mata Amritanandamayi Devi.

Early Life
She comes from a family, mainly engaged in fishing. Therefore, they did not have adequate means of livelihood. When she was just nine, she left her studies and assumed the household responsibilities and took care of her younger siblings.

Earned fame
The worshippers of Mata Amritanandamayi are of the say that, she was a mystic right from her childhood. Since the year 1981, she has been delivering lectures on spirituality all over the world. She is the founder of the Mata Amritanandamayi Mission Trust, which carries out various kinds of philanthropic activities.

Recognition
In the year 1993, Amritanandamayi Devi was one amongst the few people who represented Hinduism at the Parliament of the World's Religions in Chicago. In October 2002, she served as the keynote speaker at The Global Peace Initiative of Women Religious and Spiritual Leaders that was held in Geneva. In the year 2002, The World Movement for Nonviolence at the UN General Assembly Hall presented Amritanandamayi with the Gandhi-King Award for her contribution towards motivating people to adhere to the principle of non violence.

Darshan
Amritanandamayi embraces all the people who come to meet her. She gives them a warm hug and it is said that, in a day, she hugs more than 50,000 people. In the 2005 Cannes Film Festival, "Darshan - The Embrace", a film based on the life of Mata Amritanandamayi was chosen for showcase. It was wonderfully directed by the award winning filmmaker Jan Kounen.

Notable Works
Mata Anandamayi Devi has taken up a number of humanistic and charitable projects like constructing homes and hospitals for the poor and needy. Other activities consist of establishing women's shelters, orphanages, eye clinics, community aid centers etc. There are myriad centers of Amma in the United States that run 'Mother's Kitchen', or 'vegetarian soup-kitchens'. The volunteers cook meals for the poor and underprivileged people.

Mata Amritanandamayi Math runs nearly 12 temples, 33 schools etc. It builds houses for the homeless people. There are about 35 welfare centers of Amma world over. In the recent times, Mata Amritanandamayi Math has made the announcement of making the donation of 23 million dollars for the welfare of the victims of the 2004 tsunami. In the year 2005, the math contributed a large amount of $1,000,000 to the Bush-Clinton Hurricane Katrina fund. In March 2007, the trust declared that it will offer help of Rs 200 crore for the wellbeing of the distressed farmers of Maharashtra, Kerala etc.