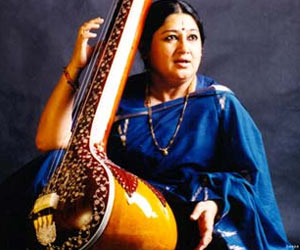 Shubha Mudgal is among the few singers, who have made a special position for themselves in the Indian music industry. She has not only proved her talent in classical singing, but also come out successfully to adapt her voice and blend it well with the popular music of today. She is blessed with unique voice, which can be used in all kinds of singing. Well, in this article, we will provide you with the biography of Shubha Mudgal.

Her two albums namely "Ab ke Sawan" and "Pyaar Ke Geet" were widely acclaimed. She came out with an album "Mann Ki Manjeree" that was dedicated to the modern women. The album gave a platform to newcomers to come forward and exhibit their talent. Read on to know the complete life history of Shubha Mudgal.

Shubha Mudgal took training in Hindustani classical music. Though, professionally, she is a classical singer, but she has adapted her voice to sing all genres of music like Rock, Blues, Samba, Jazz, and Folk. She obtained training from renowned gurus like Pt Ram Ashreya, Pt Vinay Chandra, Pt Kumar Gandharva, Maudgalya and Naina Devi.

Her album 'Ali More Angana' was a big hit, especially amongst the youngsters. Infact, it became the favorite number to be played in the discotheques. Not only is she a famous concert artist, but also a great music composer. Her compositions are also widely appreciated. She has taken up different kinds of works. She has composed several songs for the Hollywood movies, documentaries, telefilms and many more.

Her musical repertoire consists of folk, pop and other forms of popular music. She has experimented a lot with her voice and come out with flying colors. She is one of the most popular vocalists of India. She has also sung a couple of Sufi songs. She is also actively involved in composing devotional songs and poetry. Her voice is bold enough to remind you of the sounds of the ancient music, but her presentation is absolutely modern. She has been honored with various awards including the Padma Shri.