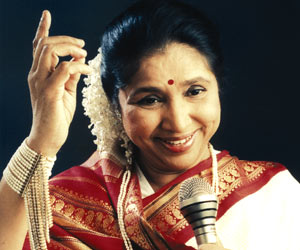 A very well known Bollywood playback singer, she is as popular as her elder sister, who is also a renowned singer. Well, we are talking about Asha Bhosle, who has mesmerized the entire country with her amazing voice. She has dominated the Indian music industry for a period more than six decades. Even now, she is constantly enhancing her music collection and entertaining the people.

Asha Bhosle is a very versatile singer, who has put her heart and soul in modulating her voice to come up with something original and creative. Her voice is very adaptative. She is very well able to sing the songs for romantic situation. When naughtiness is required, she can change her voice and sing according to the situation. In this article, we will present you with the biography of Asha Bhosle.

Life
Asha was born on September 8, 1933 in a small village of Goar in Sangli, Maharashtra to the Marathi family. She is the daughter of Pandit Dinanath Mangeshkar, who was a theater artist as well as a classical singer. She lost her father, when she only nine years old. The family kept moving from one place to another. They went from Pune to Kolhapur and then to Bombay (now Mumbai). To support the family, she and her elder sister Lata started singing in the films. To know the complete life history of Asha Bhonsle, read on.

She got her first break when she signed the agreement to sing the song "Chala Chala Nav Bala" for the Marathi movie Majha Bal (1943). Her first Hindi song was "Saawan aaya", which was recorded for Hansraj Behl's film Chunariya (1948). When she was sixteen, she fell in love with a 31-year old man Ganpatrao Bhosle and she was firm about marrying him. She eloped with him and tied her wedding knots with him against the wishes of her family. She did not derive happiness in this relationship and after a few years, she shifted to her mother's home along with her kids.

She is one of the most skilled and talented singers. Her music repertoire consists of film music, ghazals, pop, traditional Indian classical music, folk songs, qawwalis, bhajans, and Rabindra Sangeet. She has sung songs in fourteen languages including Hindi, Marathi, Bengali, Gujarati, Punjabi, Tamil, English, Russian and Malay. She has sung nearly 12,000 songs.

Though, she has made a vast collection of music, but she is most famous for the Bollywood songs. She headed her first step towards establishing her career in the year 1943. She has been the most prominent personality of the Indian music industry since the last six decades. She has done playback singing for more than 950 Bollywood movies.

Career
Initially, Asha had to struggle a lot to get assignments to sing for the lead roles. However, during the 1950s, she sang a large number of songs. Infact, period she sung more than any other playback singer. Her initial songs were mainly composed by Sajjad Hussain, A R Qureshi and Ghulam Mohammed. Thereafter, she got plenty of singing assignments.

Apart from Hindi songs, she also sang for many Marathi movies such as Khedyamadhle ghar kaularu, Majha hoshil Kaa? Bugadi mazi and Nach re mora. Her Marathi bhajans, natyageet and bhav-geet are liked by people even today. O.P. Nayyar gave a boost to her career by giving her a major break in C.I.D. (1956). Asha's performance in the film Teesri Manzil was well acclaimed. In the film, she worked along with R.D.Burman. Thereafter, they worked together in quite a number of films and also decided to tie wedding knots with each other. Their collaboration earned them name and fame.

During 1960s and 1970s, she became the voice of the most famous dancer of Bollywood Helen. Popular Asha Bhosle-Helen numbers include Piya tu ab to aaja (Caravan), O Haseena Zulfon Wali (Teesri Manzil) and Yeh Mera Dil (Don). She took up the challenge of showing her versatility by taking up the challenge of singing Ghazals in the films Umrao Jaan (1981) and Ijazat (1987). Her work was widely applauded.

During the 1990s Asha experimented with the remixed versions of R.D. Burman songs. Her efforts were criticized by many people, accusing her for tampering with the golden melodies of the past. Nevertheless, there were albums like "Rahul And I", which were appreciated by people. In the year 1997, Asha came out with her private Indipop album Janam Samjha Karo, which was a major hit. The album brought her great honor and recognition. She even received the 1997 MTV Award.