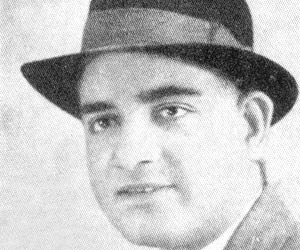 Here more about the biography of KL Saigal. It was his travel as salesman that brought KL Saigal to Lahore, where he befriended Meharchand Jain. With a passion for music, both remained buddies even when they moved to Kolkata and had many a mehfil-e-mushaira. During that time, Kundan was an emerging singer and Meharchand always encouraged him to pursue his talent. As such, Kundan Lal Saigal's interest in music continued and become more intense with time.

Luck turned in his favour when during early 1930s, KL Saigal was appointed by B.N. Sircar, who was the manager of the Kolkata-based film studio, New Theatres. It was here that Kundan got introduced to R.C. Boral, the great music composer of the film company, who liked KL Saigal's singing style very much. KL Saigal was, thus, hired by the New Theatres on a contractual agreement of Rs 200 every month. Thereafter, Kundan met contemporaries like Pankaj Mullick, K.C. Dey, Pahari Sanyal et al. But in very short time, he surpassed them all.

After this, the life history of KL Saigal saw him get hold of his first film role. It was an Urdu film, Mohabbat Ke Ansoo that was followed by others like Subah Ka Sitara and Zinda Laash in the year 1932. Next year, his four bhajans for the movie Puran Bhagat whipped up a huge uproar in the country. And this took KL Saigal to the yet unsurpassed heights of success in the Indian film industry. After this, the other hit films that followed were Yahudi Ki Ladki, Chandidas and Rooplekha.

In the year 1935, Kundan Lal Saigal enacted a particular role in a movie that changed his fortunes for ever. It was the drunken character of Devdas based on a book written by Sarat Chandra Chattopadhyay and directed by P.C. Barua. The songs of this film turned hugely popular with the public throughout the country. The great Indian philosopher and thinker, Rabindranath Tagore first heard Saigal before giving consent for the first time to a non-Bengali singing his songs. Saigal endeared himself to the whole of Bengal through his 30 Bengali songs.