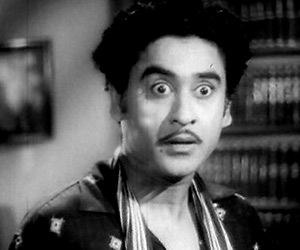 Here's more update on the biography of Kishore Kumar, who used to be among the three leading male Bollywood playback singers along with Mukesh and Mohammed Rafi during his life time. Born into a Bengali family, Kishore Kumar's original name was Aabhas Kumar Ganguli. His parents were advocate Kunjalal Ganguli and Gouri Devi, who hailed from a very well-to-do family. Abhas was the youngest of four siblings. The other three were Ashok Kumar, who was the eldest, Sati Devi and Anoop Kumar.

Abhas was still a child when his eldest brother, Ashok Kumar became a famous Bollywood actor. This gave Abhas or Kishore Kumar the apt opportunity to get an easy break into the Hindi filmdom. Kishore Kumar did not have a formal training in music, but it was just a matter of time before he started taking a keen interest in movies and music. He was a great fan of legendary senior Indian actor-singer, Kundan Lal Saigal and he soon started mimicking his style. His gradually developed his own yodeling style of singing after music director, SD Burman advised him to stop copying Saigal.