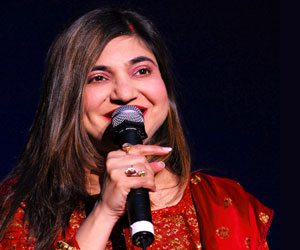 Alka Yagnik is one of the most talented singers of Bollywood. She was born to a Gujarati family on the 20th of March in Calcutta (now Kolkata). She comes from a music background. Both her parents were actively involved in classical music. Since the late 1980s, she has been one of the most leading playback singers of the Indian music industry. Well, in this article, we will present you with the biography of Alka Yagnik, so read on.

Life History
Alka has always been fond of singing. Since young age, music has been her first love. Initially, she thought it to be nothing more than a hobby, but later she realized that if pursued seriously, it can be taken as a profession. When she was six years old, she began singing Bhajans for the Calcutta Radio. From then onwards, she started singing at a professional level.

For establishing her foothold in the field of music, she went to Mumbai. She got her first break, when she was given the assignment for singing a song for the film Payal Ki Jhankaar in 1979. Then, she sang the song "Mere Angene Mein" for the film Laawaris (1981). Her biggest hit was the song Ek Do Teen from the film Tezaab that was released in 1988. The song broke all the records and made her star overnight.

Her voice has been mainly used for the young generation stars. She has done playback singing for many famous actresses like Rakhee, Hema Malini, Farida Jalal, Rekha, Kajol and Preity Zinta. Besides Hindi songs, she has also sung in other languages such as Bengali, Marathi, Tamil, Malayalam, Telugu, and Punjabi.