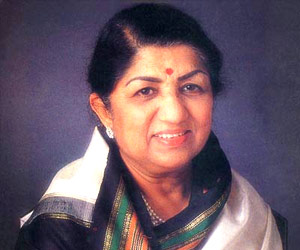 Lata Mangeshkar is the pride of Indian music industry. Blessed with beautiful voice, she is the most well known Indian vocalist. Highly versatile, she has sung in more than 20 languages. To honor and give recognition to her works, Lata Mangeshkar is also known as the Nightingale of India. Well, in this article, we will present you with the biography of Lata Mangeshkar.

Early Life
Lata was born on September 28, 1929 in Indore, Madhya Pradesh as the daughter of Dinanath Mangeshkar, who was a classical singer as well as a theater artist. She was the first child of the Mangeshkar family. She was born in Indore, but brought up in Maharashtra. When she was five years old, she began working as a theater artist in sangeet nataks. She also started taking singing lessons from her father.

Lata sang her maiden cinematic song for the Marathi film Kiti Hasaal (1942). Her father did not like the idea of her daughter singing for the films. So, her song was deleted from the movie. In the year 1942, she lost her father. Due to sudden demise of her father and unsound financial condition of the house, she decided to play small roles in various Hindi and Marathi films. She had to take up the acting assignments, despite the fact that, she was not at all fond of acting. To know the complete life history of Lata Mangeshkar, read on.

Career
In the year 1945, she happened to meet the film producer S. Mukherji through Ghulam Haider. Haider personally wanted her to be given an opportunity to show her singing talent. However, S. Mukherji did not like her voice and said no for giving her a chance to sing for his film. At that point of time, Haider promised himself to establish her singing career in Bollywood. He even said to the producer that, one day will come when all the producers and directors will fall on her feet and beg her to sing in their films.

Lata got her biggest break, when she was given the chance to sing the song "Aayega Aanewaala" for the movie Mahal. The song was a super duper hit. The period of 1950s witnessed tremendous growth in her career. She rose to the top in the list of Bollywood singers. She worked with all the famous composers of that era like Shankar Jaikishan, S D Burman, Naushad, Hemant Kumar, and Salil Chowdhury. Shankar Jaikishan was absolutely stunned by her voice and used her voice for playback singing in almost all the movies that he got.

The period of 1960s made her the queen of Bollywood playback singing. She sang for almost all the prominent composers of the industry and set her foothold in Bollywood. Her songs got an overwhelming response from people all over the country. During the 1970s, Lata recorded songs for Bollywood actress Meena Kumari in the film Pakeezah, which brought her recognition and popularity. She performed tracks for S.D. Burman's films like Prem Pujari, Sharmilee, and Abhimaan.

In late 1970s and early 1980s, Lata Mangeshkar worked with the children of the music composers, with whom she had worked in the past. In the year 1990, Lata established her own production house. Their first and last film "Lekin" was a total flop. Mangeshkar has also sung some non film songs including ghazals with Jagjit Singh. Lata Mangeshkar has also sung for Yash Chopra`s films including Lamhe, Dilwale Dulhaniya Le Jayenge, Darr, Yeh Dillagi, and Dil To Pagal Hai. She sang quite a number of Bengali songs with renowned music directors like Salil Chowdhury and Hemant Kumar.

Trivia
Lata Mangeshkar has composed music and also produced movies under the name of 'Anand Ghan'.
She is very fond of cooking nice dishes.
She always sings barefoot.