Emperor Humayun was the second Mughal emperor who ruled India. He was named Nasiruddin Humayun and was born on 6th March, 1508. He was declared emperor in the year 1530 and ascended the throne at the age of 22. Emperor Humayun lost the kingdom as soon as he gained it as he was inexperienced in handling a large empire. But with time and his efforts, he regained it back with some help from the Persian forces. Read this short biography to know the life history of king Humayun.

The empire that Humayun inherited after his father Babar was very unstable and lacked strong administration. This made him face many problems from the very start. The weak empire attracted aggression from external forces like the Afghans, Rajputs, etc. His biggest rival was Sher Shah Suri who defeated him in the battle of Kannauj in the year 1540. He was left with no option but to leave India and escape to Iran for sometime. 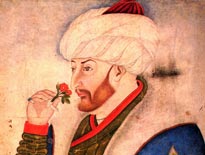 While he was wandering in Iran and Sindh, he met a young Persian girl named Hamida Bano whom he married. After a year, they had a son whom they named Akbar. According to local legends, Humayun did not have anything but some musk to gift to his well wishers and followers at that time. He broke the musk into small pieces and distributed it among his men. He predicted that one day the fame of the prince would spread like the smell of musk.

The Mughal Empire remained inactive for a period of nearly 15 years. Sher Shah Suri established his own dynasty and called it the Suri dynasty. In the year 1555, Humayun came back with a strong force and fierce determination and recovered his kingdom back. He ruled over most of India, Pakistan and Afghanistan and was an efficient ruler. He was quite the gentleman and had much interest in astrology and mathematics. Humayun was inclined towards the finer things in life and was not a very fierce warrior. He was very affectionate towards his brothers and did not punish them even though they had betrayed his trust many times.

Though Humayun managed to get his kingdom back, he couldn't rule for long. One day while coming down from his library, he slipped and fell down the stairs. He suffered massive injuries including a skull fracture. Due to his advancing age and lack of medicinal facilities, he died a tragic death. The kingdom was left with his son Akbar.