Emperor Babur has been known as the founder of Mughal Empire in India. He was born on 14th February, 1483 at a town called Andijan that is located in the present day Uzbekistan. He belonged to the Mongol tribe that also embraced Turkish and Persian. He was named Zahiruddin Muhammad and was called Babar affectionately. Babar is derived from Persian language and means lion. Babar rose to power by his determination and strength and set the foundation of the Mughal Empire for his future generations. Read this short biography of King Babur.

The Mughal Emperor Babar is described as a military genius and a skillful warrior. He is known to have built an empire of good fortune and immense stability. Not only was he an able administrator, but also a lover of fine arts and poetry. It is said that he loved nature and built many beautiful gardens and sprawling lawns. He used to organize warm welcome parties at these gardens and any spot of natural beauty. He was a warrior of extraordinary strength and is said to have climbed mountains just for exercise. 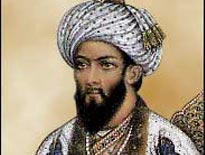 Babur was a poetic genius and his creations have been compiled as an autobiography known as Babar-nameh. They were translated into Persian during the rule of Akbar. They were then translated into English during 1921-22 and the compilation was titled "Memoirs of Babar". One finds valuable information in these works and they define Babar as someone who was very noble and kind hearted. He was a very witty person who had a streak of adventure and a keen eye for natural beauty.

Babar attained his first power position at the mere age of 12! In the year 1494, he succeeded his father as the ruler of Fargana, which is located in the present day Uzbekistan. But his uncles were greedy and did everything possible to displace him from his position and rob his territories. Babar had to spend quite some time in exiles and roam around without any shelter. His only well wishers were peasants and friends who gave him food every now and then. Babar attacked a city called Samarkand and got possession of it after a struggle of seven months. However, he was robbed off Fargana after a rebellion amongst nobles in his kingdom.

By the 16th century, Babar was determined to conquer Afghanistan and India. It is said that Babar had no plans of conquering India as such, but after Fargana was robbed off him, conquering India seemed like an attractive option. He conquered Kabul located in Afghanistan after waging a fierce battle against the nobles and the rulers. Babar crossed the mountains and somehow came to India. After waging fierce battles against the Rajputs and Lodhis, Babar managed to take possession of Delhi and Agra. After that he rapidly started to spread his territory and conquered most of Indian sub-continent and Afghanistan. He was succeeded by his eldest son Humayun who further consolidated the empire in India.