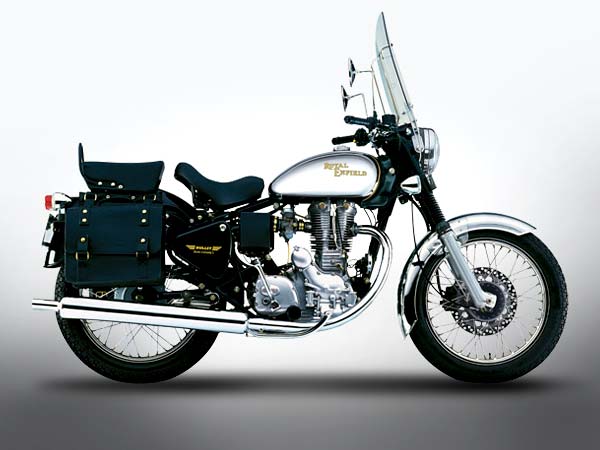 Like all bullets, Machismo 500 too has muscular designing which, assisted by cutting-edge technology, makes a grand-looking bike. The heavy bike makes the heads turn when it moves on roads. With its huge pulling power, it can even climb sharp ascents on rough terrain with ease. Machismo, which has a mighty LB engine, retains most of the Bullets character while, at the same time, embracing new features like the gas charged suspension, electric starter and disc brake making the machismo a nice offering.

Looks and Styling
The well-considered chrome color scheme distinguishes the Machismo from other Bullets. The bike has plenty of chrome and loud traffic indicators. Twin spring coiled seats, windshield and Custom crafted leather saddlebags could be added to Machismo. It is a made-to-order bike and production is limited to 500 units a year. Machismo is available in India at little above Rs 1,00,000.

Control and Comfort
Features like 7" twin lead brakes, single key operation, longer muffler and a lockable tool box add to comfort while driving. It features 280mm disc at the front and drum brake at the rear. For better grip it uses MRF 19? tyres. The bike features gas filled shock absorbers at the rear, polyurethane seats and handle bar weight to control vibrations. Valve diameters are optimised for better torque which means that Machismo requires less gear shifts in city driving.

Engine
Royal Enfield Bullet Machismo is equipped with an all-aluminum single cylinder 4-stroke 350 cc engine which churns out a peak power of 18 bhp @ 5500 rpm and a peak torque of 27.5 Nm @ 3500 rpm. The engine has a constant vacuum carburetor which assists combustion and improves initial pick-up. The CDI ignition system of the two wheeler eliminates cold start problems. Left shift 5 speed gearbox is mated to the 500cc powerful engine.