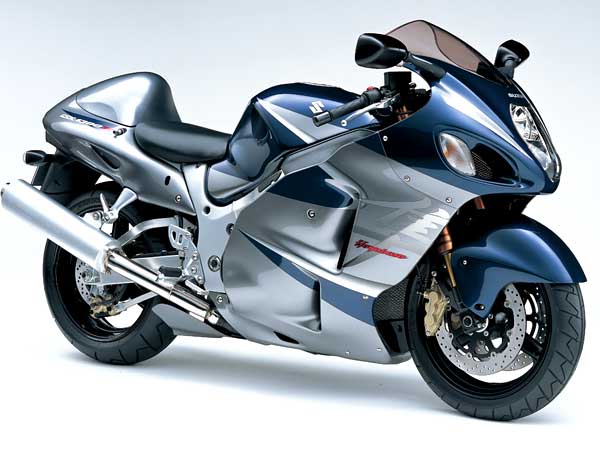 Imported super bikes have a cult status among Indian bike aficionados. Cash-rich, style-savvy Indian youth never mind exorbitant pricing of the high-performance superbikes like Suzuki Hayabusa and Kawasaki Ninja. These awesome machines ply on the Indian roads enthralling motorbike enthusiasts. As the home-grown automobile manufacturers are yet to come up with genuine high-speed superbikes, these are imported from other countries.

It is a common question why Indian manufacturers don’t make superbikes. The is that the common Indian bike rider is a commuter and not an enthusiast and that is precisely what Indian bike manufacturers cater to (the sub 150 cc segment having the highest volumes). Of course any manufacturer would make what is in demand. So when it came to ultra performance superbikes, they had to be imported.

Indian Government had put restrictions on import of more powerful bikes. However, these were eased in the EXIM Policy 2001.

Suzuki GSX1300R Hayabusa
Suzuki Hayabusa is among the most popular sports motorcycles ever produced. Since its inception the Suzuki Hayabusa was widely regarded as the fastest bike in production in the world until major Japanese motorcycle manufacturers voluntarily imposed speed regulators in their bikes under pressure from European governments.

Yamaha YZF R1
Yamaha YZF-R1, incepted in 1998, is a sports bike produced by Yamaha Motor Company. The bike successfully puts together the awesome power of the true liter class (1,000cc) with the lightweight and responsiveness of a 600-class chassis. The bike enthralls the young guys, who go for style and speed.

Kawasaki ZX12R Ninja
ZX12R was the flagship sports bike of Kawasaki Motorcycles, before the introduction of the ZX-14 (ZZR1400). With the Kawasaki ZX12R Ninja, Kawasaki threw its gauntlet into the high-performance sportbike war raging among the Japanese motorcycle manufacturers. In 2001, all Japanese bike manufacturers reached an agreement regarding top speed of their bikes, which was set to 300 km/h.

Honda CBR1100XX Blackbird
CBR1100XX Blackbird, launched in 1996, was the world's fastest production motorcycle at the time. The Blackbird cultivated reputation as a powerful, fast, and reliable sports motorcycle. Although its status of the fastest bike was taken by Suzuki Hayabusa, its production continued and was halted only in late 2007.

Importing Bikes in India
Bike enthusiasts from different corners of India have been importing high-performance bikes to satiate their zeal for high-speed biking. Notwithstanding their astronomical price tags, these cult machines do have a fair number of admirers in India.