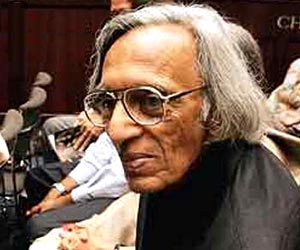 Born: July 26, 1925
Death: July 2, 2009
Achievement: Held the record for the highest price for which an Indian painting has ever been auctioned; Recipient of Kalidas Samman and Padma Bhushan

Tyeb Mehta was a well known Indian artist, who was known all over the world for his brilliant painting. A multifaceted personality, he also dabbled in filmmaker and made a mark there. He held the record for the highest price for which an Indian painting has ever been sold, in a public auction. It was his triptych painting Celebration that, on being sold for 15 million Indian rupees ($300,000 USD), gave him this honor.

Tyeb Mehta was born on July 26, 1925 in Kapadvanj, Gujarat. He initially worked as a film editor in a cinema laboratory. However, his interest in painting took him to Sir J.J. School of Art, Bombay, where he studied painting from 1947 to 1952. There, Mehta also came in contact with Akbar Padamsee and became a close associate of the painters in the Progressive Artists' Group.

In 1954, Tyeb Mehta visited London and Paris for four months, following which he returned to India to concentrate on painting and sculpture. He took part in numerous group exhibitions and organized his first solo exhibition of drawings, paintings and sculptures at the Jehangir Art Gallery, Bombay, in 1959. He lived and worked in London from 1959 to 1965.

Tyeb Mehta returned to India in 1965 and lived in Delhi till 1968. In 1968, he visited United States, on a Rockefeller Fellowship. Around this time, he also dabbled in films. His film 'Koodal' won the Film fare Critic's Award in 1970. In the 1980s, he worked as an Artist in Residence in Shantiniketan. He was also awarded the Kalidas Samman by the Madhya Pradesh Government in 1988.

On 2nd July 2009, Tyeb Mehta left for the holy abode, following a heart attack. He is survived by his wife - Sakina, a son and a daughter. Tyeb Mehta's large body of work, spanning over six decades, established him as one of the greatest names in the field of Modern Indian Art. His paintings raised numerous questions about the human condition, some of which remain unanswered till date.