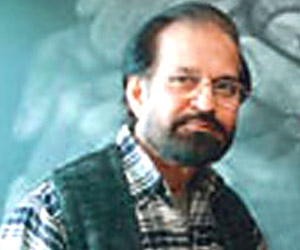 Born in the year 1941 at Delhi, Rameshwar Broota has emerged as one of the most prominent painters of India in the present times. Having an innate passion for art, he joined the College of Art in the capital city during the year 1964. And he went to become the head of the well-known institute Triveni Kala Sangam devoted to the promotion of art and culture in the year 1967. Since then he has been encouraging and guiding young talents at the institute. Read on about the biography of Rameshwar Broota.

The dire poverty and misery of people all round anguished Broota too much when he was young. As such, most of his early paintings are a pungent reminder and pointer at the sorry state of affairs in the society during his time. Many of his works made satirical remark at the rampant corruption. Among his famous works is the Gorilla Series, in which Broota had painted 'humanized' gorillas. Though not a very prolific artist, Rameshwar Broota developed his own style with time.

Here's more information about the life history of Rameshwar Broota. Once Broota inculcated his own distinct style, he started painting mainly in monochromes. The surface of the canvas is usually painted in matte black and Broota works with a thin blade to create light and forms. The paintings of Broota feature on monumental humans with all of them wounded, hardened and somehow dehumanized.

Broota has participated in many painting exhibitions like 'Pictorial Space' at the Lalit Kala Akademi in New Delhi (1 977), 'India: Myth and Reality' at the Museum of Modem Art at Oxford (1982) and so on. Broota has been the recipient of many awards like the three National Awards from the Lalit Kala Akademi during the years 1980, 1981 and 1984 respectively, the AIFACS Awards in 1973 and 1975 and the Hyderabad Art Society Award for Graphics in 1976 and many others. Rameshwar Broota lives and works in New Delhi.