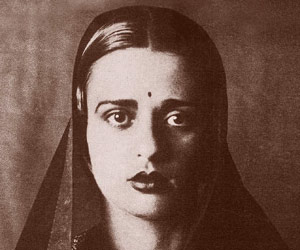 Born: 1913
Died: December 6, 1941
Achievements: One of the most promising Indian artists of the pre-colonial era; youngest ever and the only Asian to be elected as Associate of the Grand Salon in Paris.

Amrita Shergill was a renowned Indian painter. She was one of the most charismatic and promising Indian artists of the pre-colonial era. Most of her paintings reflect vividly her love for the country and more importantly her response to the life of its people.

Amrita Shergill was born in Hungary in 1913. Her father was a Sikh aristocrat and her mother was Hungarian. Both her parents were artistically inclined. Her father, Umrao Singh Majitha, was a Sanskrit Scholar and her mother, Marie Antoinette, was a pianist. Amrita spent her early childhood in the village of Dunaharasti in Hungary. In 1921 her family moved to Shimla. It was at this time that Amrita Shergil developed interest in painting. An Italian Sculptor used to live in Shimla. In 1924, when the Italian Sculptor moved to Italy, Amrita Shergill's mother too moved with there along with Amrita.

In Italy Amrita was enrolled at Santa Anunciata, a Roman Catholic institution. Amrita did not like the strict discipline of the Catholic school but on the flip side she was exposed to the works of the Italian masters and this further fanned her interest in painting. In 1927, Amrita Shergil returned to India and began taking lessons in painting under Ervin Backlay. But Ervin’s insistence that Amrita should copy real life models exactly as she saw them irked Amrita and thus her painting stint under Ervin Backlay was short lived.

In 1929, at the age of sixteen, Amrita Shergil sailed to France to study Art. She took a degree in Fine Arts from the Ecole des Beaux Arts, Paris. She also learnt to speak and write French. It was in France that she started painting seriously. The Torso, one of her early paintings was a masterly study of a nude which stood out for its cleverness of drawing and bold modeling. In 1933, Amrita completed Young Girls. Critics and Art enthusiasts were so impressed by Young Girls that Amrita Shergill was elected as Associate of the Grand Salon in Paris. Amrita was the youngest ever and the only Asian to be honored thus.

In 1934, Amrita Shergill returned to India and evolved her own distinct style which, according to her, was fundamentally Indian in subject, spirit, and technical expression. Now the subject of his paintings were the poor, the villagers and beggars. In 1937, Amrita Shergill went on a tour of South India. This gave her the opportunity to achieve the simplicity she always wanted in her paintings. In 1938, Amrita Shergill went to Hungary and married her cousin Victor Egan much to the opposition of her parents. She married purely for security reasons as she felt that she was essentially weak and needed someone to take care of her. In 1939, Amrita Shergill returned back to India and started painting again. After her return her health deteriorated and she died on December 6, 1941.