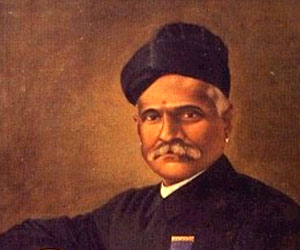 Born: April 29, 1848
Died: October 2, 1906
Achievements: Raja Ravi Varma was one of the greatest painters in the history of Indian Arts. He brought Indian painting to the attention of the larger world; provided a vital link between the traditional Indian art and the contemporary art.

Raja Ravi Varma is considered as one of the greatest painters in the history of Indian Arts. He is famous for his depiction of scenes from the epics of the Mahabharata and Ramayana. Raja Ravi Varma is most remembered for his paintings of beautiful sari clad women, who were portrayed as very shapely and graceful. He is considered as modern among traditionalists and a rationalist among moderns.

Raja Ravi Varma was born on April 29, 1848 in the royal palace of Kilimanoor, 25 miles from Thiruvananthapuram in Kerala, India. His parents were Umamba Thampuratti and Neelakandan Bhattathiripad. At the age of seven years he started drawing on the palace walls using charcoal. His uncle Raja Raja Varma noticed the talent of Ravi Verma and gave him preliminary lessons in painting. At the age of 14, Ayilyam Thirunal Maharaja took him to Travancore Palace and he was taught water painting by the palace painter Rama Swamy Naidu. He was later given lessons in oil painting by a British painter, Theodor Jenson.

In 1873, Ravi Varma won the first prize at the Madras Painting Exhibition. He achieved worldwide acclaim after he won an award for an exhibition of his paintings at Vienna in 1873. He traveled throughout India in search of subjects. He often modeled Hindu Goddesses on South Indian women, whom he considered beautiful. He stayed in the city of Bombay in Maharashtra for some years and drew many a beautiful Maharashtrian woman.

Ravi Varma is particularly noted for his paintings depicting episodes from the story of Dushyanta and Shakuntala, and Nala and Damayanti, from the Mahabharata. Raja Ravi Varma was fascinated by the power and forceful expression of European paintings, which came across to him as strikingly contrasting to stylized Indian artwork. His paintings are considered to be among the best examples of the fusion of Indian traditions with the techniques of European academic art..