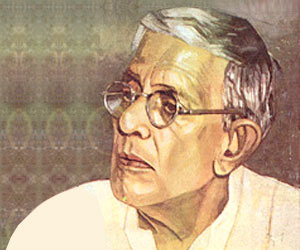 Born: 1887
Died: 1972
Achievements: Developed a personal painting style inspired largely by traditional Indian folk and village arts, particularly those of Bengal. Through his paintings he gave expression to the scenes of everyday life of the people of rural Bengal

Jamini Roy was one of the most significant and influential painters of the 20th century. He was born in a middle-class family in 1887 at Beliator village in Bankura district of Bengal. His father Ramataran Roy was an amateur artist who, after resignation from government service, spent the rest of his life in his village amidst the potters.

In 1903, at the age of sixteen, Jamini Roy came to Calcutta and studied at the Government School of Art. He learnt academic methods then in vogue in the West, and achieved his early fame as a portrait painter in the European tradition. However, soon Jamini Roy cultivated a personal painting style inspired largely by traditional Indian folk and village arts, particularly those of Bengal. Jamini Roy, through his oil paintings, gave expression to the scenes of every-day life of the people of rural Bengal.

For his paintings, Jamini Roy selected themes from joys and sorrows of everyday life of rural Bengal, religious theme like-Ramayana, Sri Chaitanya, Radha-Krishna and Jesus Christ, but he depicted them without narratives. Apart from this he painted scenes form the lives of the aboriginal Santhals, such as 'Santhals engaged in drum-beating' 'Santhal Mother and Child' 'Dancing Santhals' etc.

In his career as an artist Jamini Roy earned fame by evolving his own language of painting which he termed as 'Flat Technique'. Jamini Roy used cheap indigenous pigments for his art to make them within the reach of the affluent as well as the poor. Like the pata-painters of Bengal he proposed his own paintings from indigenous materials like lampblack, chalk-powder, leaves and creepers.

The exposition of Jamini Roy's works were first held in British India Street (Calcutta) in 1938. Jamini Roy's pictures become very popular during the 1940s and clientele included both the Bengali middle class and European community. In 1946, his work was exhibited in London and in 1953 in New York.

Some of his famous paintings are: