With the coming of the Mughals in India and the Turkish rule, there were many developments and changes in the Indian culture. Not just culture, there were major developments in architecture and art. The indo Islamic culture was a blend of Hinduism and Islam. It was neither strict Hindu nor strict Islam. The history of Indo Islamic culture is very interesting and an important milestone in the historical legacy of India. The Indo Islamic architecture can be broadly classified into two main categories:
The former was developed by the Sultans of Delhi while the latter was inspired from Islamic Architecture of Central Asia and the Hindu Architecture of India. The indo Islamic style was unique and its typical characteristics were spaciousness and width. The landscape was dominated by mosques and the dome became an inseparable part of any architectural monument. The dome was inspired by Hindu temples that had a circular top called "Kalash". 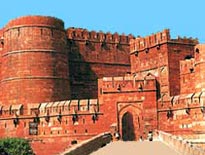 The monuments were decorated with calligraphy and intricate designs. A very important symbol of the indo-Islamic architecture was the magnificent tomb or burial chambers for the emperors. It was developed and refined during the Mughal era. The tombs were surrounded by beautiful gardens and the grave used to be placed below the memorial plaque. One of the most famous examples of a tomb is the Taj Mahal.

Though this form of architecture started before the end of the Turkish rule, it was under Emperor Akbar that Mughal architecture got its due importance and fame. Akbar concentrated on using red sandstone for most of the monuments. He blended some unique foreign styles with the Mughal architecture like combining, high minarets, gardens, pillars, etc. with the main monument. The monuments were lavishly decorated with precious metals like gold, silver and precious stones like diamonds, emeralds, rubies, etc. some other famous examples of the indo Islamic architecture are Qutub Minar, Alai Darwaza, Quwwat-ul-Islam mosque, Tughlaqabad Fort, Fatehpur Sikri, Agra Fort, Taj Mahal, Red Fort of Delhi etc.