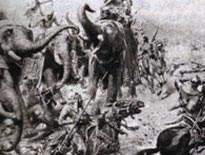 After capturing Punjab, Babur proceeded towards Delhi to meet Ibrahim Lodhi. The Sultan got the message that Babur was proceeding towards Delhi with a huge army and strong artillery. But Ibrahim Lodhi's army was much bigger and he had war elephants. But Babur defeated the army with organization and skilled maneuvering. This historic battle of Panipat took place on April 21st (1526) at the place called Panipat which is located in modern day Haryana. This place has been the site many important battles in the history of India.

Though Ibrahim Lodhi had elephants and huge army, he did not know how to control them. Babur had guns and he used them to scare the elephants. As a result the elephants went out of control and trampled Lodhi's own army. He lost a lot of soldiers like that. Ibrahim Lodhi was finally abandoned by his generals and advisors and was left to die on the battlefield. This battle was the turning point in the history of Delhi as it marked the beginning of one of the most important empires in India, the Mughal dynasty.