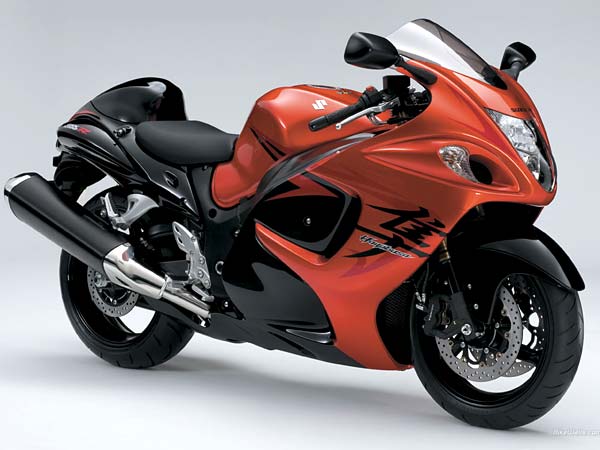 Suzuki Hayabusa is among the most popular sports motorcycles ever produced. Since its inception the Suzuki Hayabusa was widely regarded as the fastest bike in production in the world until major Japanese motorcycle manufacturers voluntarily imposed speed regulators in their bikes under pressure from European governments. The bike is also known as GSX1300R in some countries. In the unrestricted environment of a racetrack, Hayabusa can thrill anyone with its awesome power.

Design
The bike has twin-spar aluminum frame. Aerodynamic efficiency is optimized with a wider fairing and a 15mm-taller windscreen to shelter its rider effectively. The body panel joints are smoother and have no exposed fasteners. Top of the fuel tank is lower allowing a tighter full tuck. The tailsection of the bike has an enlarged speed hump.

Technical Features
Response from the high-tech fuel-injection system is impressive, aided by injectors with fine-atomizing 12-hole squirters. Radial-mounted four-piston calipers can employ brakes effectively. The new slipper clutch also lends effective help in braking. The clutch has the Suzuki Clutch Assist System that enhances the amount of force on the clutch plates without using stiffer clutch springs. It also has a new friction material for better feedback at the engagement point. Exhaust system takes care of the stringent emissions standards.

Hayabusa Journey
Hayabusa was introduced by Suzuki in 1999. It derived its name from the Japanese term for the Peregrine Falcon, the fastest creature on the planet with speed exceeding 300 km/h. Hayabusa was a massive success right from its inception, encouraging other bike manufacturers to come up with similar speedsters. However, none of its competitors was as successful in the US and European markets. The 2008 model carried a MSRP of US$11,999.