The topography of Indian subcontinent is so varied that it supports a wide variety of wildlife. There is a huge population of animals as well as birds living in the wild regions of the country. However, the threat of poaching, along with habitat loss, has led to a rapid decline in the population of wild animals. To reverse this trend, numerous national parks as well as wildlife sanctuaries have been set up in India. These parks and sanctuaries are serving as the natural abode of the majority of wildlife and helping in the augmentation of their population. In the following lines, we have covered almost each and every famous Indian national park and wildlife sanctuary: 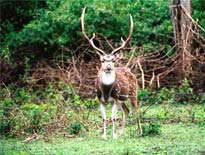 Bandipur National Park is situated on the Mysore-Ooty Highway, at the confluence of Deccan Plateau and Western Ghat Mountains. The wildlife park falls under the Chamarajanagar district of the South-Indian state of Karnataka.

Gir National Park
Gir National Park, established in the Junagarh district of Gujarat, is spread over an area of 1412 sq km. The park holds the distinction of being the only natural habitat of Asiatic Lions in the whole world.

Periyar National Park
Periyar National Park lies nestled in the Western Ghats, falling in the Idukki district of Kerala. The lake that constitutes a major portion of the park came into existence after a dam was constructed on the Periyar River, in the year 1895.

Rajaji National Park
Rajaji National Park is situated in the state of Uttaranchal, now known as Uttarakhand. The picturesque beauty and rich biodiversity of the park serve as its major attractions for both nature lovers as well as wildlife enthusiasts.

Sariska National Park
Sariska National Park lies nestled in the Aravali Hill ranges of Rajasthan. One of the most popular national parks of India, Sariska falls under the Alwar district. Once the hunting reserve of the royal family of Alwar, Sariska was declared as a wildlife sanctuary in the year 1958.

Sultanpur Bird Sanctuary
Sultanpur National Park falls under the Gurgaon district of Haryana. It is situated on the Gurgaon-Farukh Nagar Road, at a distance of approximately 50 km from Delhi and 15 km from Gurgaon.