The name 'Deer' is given to the ruminant mammals belonging to the family Cervidae. They are one of the most beautiful creatures on this earth and extend to approximately 34 species. Male deer, in India as well as the world, are known as stags, harts, bucks or bulls, depending upon the species to which they belong. While, the females are known as hinds, does or cows. One can find deers widely distributed throughout the world, including the Indian subcontinent. The only continents where deer are not found are those of Antarctica and Australia.

The 34 species of deer can be divided broadly into two categories, known as the old world group and the new world group. The former comprises of the subfamilies Muntiacinae and Cervinae, while the latter includes the subfamilies Hydropotinae and Odocoileinae. Read on to get more information about the Indian deer. 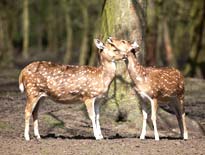 Axis Deer, also known as Chital Deer or Spotted Deer, is the native animal of the Indian subcontinent. It is found very commonly in India and is one of the most beautiful animals in the country. The spotted deer of India was introduced in the state of Texas in the 1930s. Since that time, axis deer of India has become the most widespread of the entire deer species.

Brow-antlered Deer
Brow-antlered deer are known by the scientific name of Cervus eldii. They have a number of other names also, like Eld's Deer, Sangai Deer, Thamin Deer and even Dancing Deer. The maximum lifespan of the Thamin deer of India is only ten years and the deer has three subspecies also.

Hog Deer
Hog Deer is a subspecies of deer, found in the areas stretching from Pakistan, through northern India, to mainland Southeast Asia. A population of the hog deer was introduced in a number of countries, including Australia, the United States and Sri Lanka.

Muntjac Deer
Muntjac Deer fall in the category of those deer that are shy and elusive. They are also known by the name of Kakad deer or the Barking deer in India. The reason for this name is their alarm call, which seems very much similar to the barking of a dog. Indian Muntjac deer counts amongst the ten subspecies of the Barking deer in the world.

Musk Deer
Musk deer comprise of one of the most endangered deer species, not only in the Indian subcontinent, but also in the whole world. They are classified as a subfamily of the Cervidae and have four sub-species.

Sambar Deer
Sambar Deer are dark brown in color and attain a height of 102 cm to 160 cm (40 to 63 inches). The weight of the sambar deer of India may touch 300 kg. There are chestnut marks on the rump as well as the underparts. Sambhur deer of India also have beautiful manes. However, they are not spotted by birth. The spots develop gradually after birth.

Swamp Deer
Swamp Deer, also known as Barasingha, is one of the most vulnerable species of deer of the Indian subcontinent as well as the world. Presently, one can find them only in the protected sanctuaries of India. Known by the scientific name of Cervus duvauceli, the swamp deep of India derives its name, Barasingha, from its large antlers.