Snow leopard is a native animal of mountain ranges of central and southern Asia, including India. It is also known as Ounce and has a scientific name of "Panthera uncia". Snow leopards can live for a maximum of 18 years in then wild. In captivity, their lifespan increases to 20 years.

No Connection with Leopard
Despite the common misconception, the snow leopard has no relation with the leopard. Infact, some people believe that it has a close connection with cheetah. Both of them show similar physical traits to quite an extent and both are incapable of roaring. 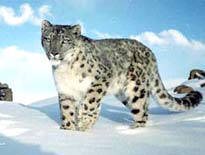 The coat of a snow leopard of India is gray in color and is covered with ringed spots and rosettes of black or brown. The tail is striped and the fur is soft as well as beautiful. The tail as well as the bottom part of the paws of snow leopards is covered with fur. Snow leopards may weigh upto 75 kg and the length of their head and body may reach 59 inches. Their tail is also quite long and measures between 31 and 39 inches. The head of a male snow leopard is much squarer and wider than that of the female.

Natural Habitat
During summer season, snow leopards prefer to stay either above the tree line on mountainous meadows or in the rocky regions of the Indian subcontinent, which are upto 6000 m in height. Winter season is the time for them to come down to an altitude of somewhere around 2000 m. The home range of a snow leopard varies to quite an extent. For example, in Nepal, they need only 30-65 sq km to survive, while, in Mongolia, their range increase to 1,000 sq km. In central and south Asia, they are found in Afghanistan, Bhutan, China, India, Kazakhstan, the Kyrgyz Republic, Mongolia, Nepal, Pakistan, Russia, Tajikistan, and Uzbekistan.

Behavior
We mostly find snow leopards leading isolated lives and rarely forming any groups. Usually, they kill animals, which are thrice as big as they are.

Mating behavior
The mating season of the snow leopard extends from January to May and the gestation period is usually of 98 to 103 days.

Diet
Snow leopards are carnivores and have a diet consisting of ibex, bharal, markhor, urial, boars, marmots and other small rodents.

Status
Snow leopards have been listed under CITES, Appendix I, Endangered Species Act. Their total population (throughout the world) ranges between 3,500 and 7,000 in the wild and 600 to 700 being in the various zoos of the world.