Indian wild ass, also known as khur, is one of the subspecies of wild ass belonging to southern Asia. Its scientific name is Equus hemionus khur. Wild ass of India has an average age of 20-25 years.

Physical Traits
Indian wild ass is quite dissimilar in appearance from the African wild ass. However, its looks are quite similar to that of the mule. The coat is usually sandy in color, but may vary from reddish gray to beige, to pale chestnut. The mane is dark and erect and it goes from the back of the head to the neck area. Following the mane is a dark brown stripe that moves along the back of the animal to the root of its tail.

Asiatic wild ass, belonging to India, may attain a body length of upto 260 cm and shoulder height of around 120 cm. Its tail is quite slim and slender and may gain a length of approximately 80 cm. The tail is covered with brownish yellow hair. The body weight of Indian wild ass hovers somewhere around 250 kg. The mouth is slender and the ears are long and pointed. One of the fastest animals in the world, it can attain the maximum speed of 50 km per hour. 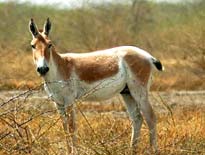 The natural habitat of Asiatic wild ass comprises of saline desert, grassland in arid zone and shrub land of India. Its geographical range extends from western India, through Sind and Baluchistan, Afghanistan, and southeastern Iran. Presently, the animal is mainly found in the little Rann of Kutch and its surrounding areas (lying in the Greater Rann of Kutch) in the Gujarat province. Indian wild ass also inhabits Surendranagar, Banaskantha, Mehsana, and other Kutch districts.

Behavior
Male wild ass, known as stallion, is found either living alone or in a small group of 2 to 3 members. However, family groups are quite common.

Diet
Indian wild ass is usually seen grazing between the period of dawn and dusk. It feeds mainly on grass, leaves and fruits of plant, crop, Prosopis pods, and saline vegetation.

Mating Behavior
Mating in case of Indian wild ass usually takes place in the rainy season. The stallions fight against each other for the possession of the female. The age of maturity is 2 to 3 years. When the mating season of a female wild ass, known as mare, approaches, she leaves the group and goes with the stallion. They live together for a few days and then, come back to join the group. The gestation period lasts for approximately eleven months, after which a single calf is born.

Status
The population of Indian wild ass is declining at a fast pace. One of the reasons for this is that it became a victim of a disease known as surra in 1958 and 1960, which resulted in the death of many animals. In November and December of 1961, the outbreak of South African Horse Sickness led to a further decline in the population. The other threats include habitat destruction because of encroachment, excessive grazing, etc.