Bengal tiger is a subspecies of tiger, which is found in the Bengal region of the Indian subcontinent. One of the most common tiger subspecies, it is also found in a number of other Asian countries, like Bangladesh, Nepal, Bhutan, Myanmar, Tibet, etc. Usually Royal Bengal Tigers of India are reddish-brown to rust-brown in color with black stripes all over. However, a mutation may result in their color being white also. Such a tiger is known as the White tiger. Bengal tiger is the national animal of both the Indian subcontinent as well as Bangladesh.

Physical Traits
Bengal tiger has a coat of reddish-brown to rust-brown color, with black stripes and a white underbelly. The head and body of a male tiger measures 6 to 9 feet in length. Its tail may grow as long as 3 feet. An average Royal Bengal tiger has a weight of somewhere between 400 and 660 pounds (180 and 300 kg), though some tigers have been found to weigh more than 300 kg also. Its shoulder height may measure upto 3 feet (0.97 m). The maximum length of the skull may be around 10 to 15 inches (250 to 380 mm). 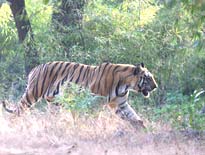 A female Bengal tiger may grow to a length of 5 to 6 feet in length (only head and body). Its tail is may be around 2 to 3 feet long. Standing at a shoulder height of around 2.5 feet, female Bengal tigers may weigh around 250 to 450 pounds (110 to 200 kg). Their maximum skull length may be about 8 to 12 inches length. The largest Bengal tiger seen till date weighed close to 390 kg.

Diet
Bengal tigers of India survive on a purely carnivorous diet. Their prey primarily comprises of medium and large-sized animals, like wild boar, deer, gaurs, water buffalo, young Asian Elephants and rhino calves. They may also stalk small animals, namely hares, monkeys, langurs and peacocks. At times, Bengal tigers may hunt other predators like leopards, wolves, jackals, foxes, crocodiles and dholes. They can eat upto about 40 kg (84 lb) of meat at a time and then go without eating for days at a stretch.

Behavior
Bengal tiger is mainly a solitary creature, which forms alliances only during the mating period. It is a nocturnal creature, which prefers to hunt at night. Bengal tigers are extremely good tree climbers and are also quite apt at swimming. Infact, they swim quite frequently to ambush their prey, which are drinking or swimming or trying to escape.

Mating Behavior
Mating usually takes place either during winter season or during spring season. The mating period lasts for 20 to 30 days, during which one can hear loud and distinct communication calls. The cub stays with the mother and siblings till two years of age, after which it goes off to wander on its own.

Status
The population of Bengal tigers, throughout the world, is estimated to be approximately 4,500. Of this, a major proportion (around 3000 tigers) lives in the Indian subcontinent. Early 1990s saw the population of tigers in India declining at a fast pace, because of large-scale poaching as well as habitat loss. Tiger Conservation Program, known as Project Tiger, was started in India to improve the status of tigers. However, it success is open to question till date.

Threats
The major threats to the Bengal tiger comprise of poaching and habitat destruction. They are hunted for their teeth, nails and skin and even killed for their other parts used in East Asian medicines. Urbanization and revenge killing has also contributed to the deteriorating population of the animal.

White Tigers
White tiger of India is not a separate subspecies of tiger. Rather, it is an individual specimen of the ordinary tiger, with a different mutation. In tigers, a genetic condition may cause paler coloration, resulting in the birth of a tiger that is white in color. Most of the cases of white tigers have been seen in the Bengal tigers. However, once can find such mutation in the captive Siberian tigers as well as several other subspecies. White tigers have white-to-crème colored fur. Their noses are pink and the stripes on their body are gray or chocolate-brown in color. The eyes may be blue, green or amber.