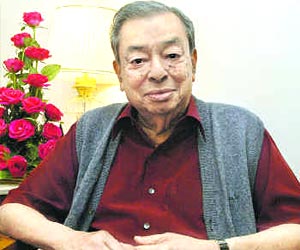 Dr. Verghese Kurien is better known as the “Father of the White Revolution” in India. He is also called as the Milkman of India. Dr. Varghese Kurien was the architect behind the success of the largest dairy development program in the world, christened as Operation Flood. He was the chairman of the Gujarat Co-operative Milk Marketing Federation Ltd. (GCMMF) and his name was synonymous with the Amul brand.

Born on November 26, 1921 in Kozhikode, Kerala, Dr. Verghese Kurien graduated with Physics from Loyola College, Madras in 1940. Subsequently, he did his B.E. (Mechanical) from Madras University and went to USA on a government scholarship to do his Masters in Mechanical Engineering from Michigan State University. In between, he completed special studies in engineering at the Tata Iron and Steel Company Institute at Jamshedpur, Jharkhand, in February 1946 and underwent nine months of specialized training in dairy engineering at the National Dairy Research Institute of Bangalore.

Dr. Verghese Kurien returned from America in 1948 and joined the Dairy Department of the Government of India. In May 1949, he was posted as Dairy Engineer at the Government Research Creamery, a small milk-powder factory, in Anand, Gujarat. Around this time, the newly formed cooperative dairy, Kaira District Cooperative Milk Producers’ Union Limited (KDCMPUL), was engaged in the battle of survival with the privately owned Polson Dairy, a giant in its field. Enthused by the challenge, Dr. Verghese Kurien left his government job and volunteered to help Shri Tribhuvandas Patel, Chairman of KDCMPUL, to set up a processing plant. This led to the birth of AMUL and the rest is history.

In 1965, the then Prime Minister Lal Bahadur Shastri created the National Dairy Development Board (NDDB) under the leadership of Dr. Verghese Kurien to replicate the success story of Amul throughout the country. In 1973, Dr. Kurien set up GCMMF (Gujarat Cooperative Milk Marketing Federation) to market the products produced by the dairies. Under Dr. Kurien’s stewardship, India became the largest producer of milk in the world. Dr. Kurien breathed his last on September 9, 2012, after a brief illness, in Nadiad, Anand, Gujarat. He was 90 years old.