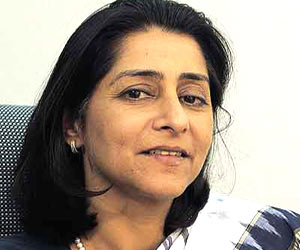 A prominent personality of the corporate world, she is the first woman to guide the functioning of a foreign bank in India. At present, she is working as the Group General Manager and Country Head of HSBC India. Well, we are talking about the corporate diva Naina Lal Kidwai. In this article, we will present you with the biography of Naina Lal Kidwai.

She was born in the year 1957. Raised in Mumbai and Delhi, she did her schooling from Simla. Alumna of Delhi University, she is the first Indian woman to have graduated from Harvard Business School. She is among the top business women of India, who have made it to the top with their constant hard work and sincerity. To know the complete life history of Naina Lal Kidwai, read on.

She began her career in the year 1982, when she joined the ANZ Grindlays Bank, which is now known as the Standard Chartered Bank. She took up a variety of banking assignments before moving to Morgan Stanley's India operation. She kept climbing the ladders of success. She played an important role in NYSE listing of Wipro. She was instrumental in facilitating the cellular phone services nationwide through a deal involving the Tatas and Birlas. Last November, she became the Managing Director of the HSBC bank.

In the year 2000, the Fortune magazine declared her as the third most powerful businesswoman in Asia. She is the mother of two children, who is maintaining a great balance between work and home. She is very fond of Indian classical as well as western music. She loves to go on trekking tours to the Himalayas. She is a nature lover, who has a keen interest in observing the wildlife. For her praiseworthy work, Naina Lal Kidwai has received many accolades. Her commendable work has been given due recognition by honoring her with the Padmashri award.