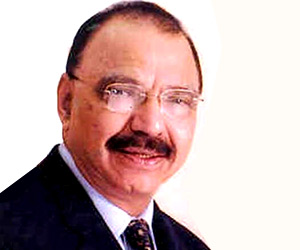 Achievement: Chairman of the Bharat Hotels chain and the single largest hotel owner.

Lalit Suri, born on 19 November 1946, can be called the uncrowned hotel king of India. He was the Chairman of the Bharat Hotels chain and the single-largest hotel owner with over 1600 rooms. Bharat Hotels chain comprises seven hotels which include the flagship InterContinental The Grand in Delhi, and six Grand hotels in Mumbai, Goa, Bangalore, Srinagar, Udaipur and Khajuraho.

Lalit Suri was an alumnus of St Columbus and Sri Ram College of Commerce, New Delhi. He represented both his school and college in swimming and athletics at the state level. Lalit Suri was trained as an automobile engineer and started his career manufacturing vehicle bodies. He commissioned his first hotel in Delhi in 1988. After that there was been no looking back.

In a few short years Bharat Hotels invested Rs 500 crore on its properties in Mumbai and Goa. In addition, the group spent Rs 42 crore on a 30-year lease on the former Bangalore Ashok, and a further Rs 40 crore on renovations. Lalit Suri was in an expansion mode. Sites for hotels had been identified and negotiated in Amritsar, Ahmedabad and Jaipur, while the search was on for the right locations in Chennai and Hyderabad. In the first phase hotels were to be constructed in Amritsar, Ahmedabad, and Jaipur adding 400-600 rooms to the Grand chain, while the next phase in Chennai, and Hyderabad, was to take the tally up by another 500 five-star deluxe rooms.

Apart from being a successful businessman, Lalit Suri was also an avid traveler and an art lover. He was also a Rajya Sabha MP. During a visit to London, for the GMR Express Travel World Awards, Lalit Suri fell ill and started complaining of chest pains and was quickly admitted to the London University Hospital. Unfortunately, the day after his hopitalisation, 10 October 2006, he passed away at the age of 59.