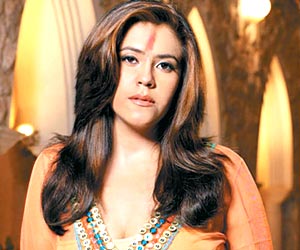 Ekta Kapoor can be aptly called as the reigning queen of Indian television industry. The serials produced by her company Balaji Telefilms are a great hit with the masses and are dominating all the major T.V. channels in India.

Born on June 7, 1975, Ekta Kapoor is daughter of former Bollywood superstar Jeetendra and sister of current Bollywood hero Tusshar Kapoor. Ekta Kapoor did her schooling from Bombay Scottish School and later on joined Mithibai College. She was not interested in academics and on the advice of her father ventured into TV-serial production at the age of 19. And soon she changed the face of Indian television industry and completely dominated it.

Today, Ekta Kapoor is the creative director of Balaji Telefilms. Her company has produced more than 25 serials and each one is being shown, on an average, four times a week on different television channels. Ekta Kapoor's serials have captured the imagination of masses. She broken all previous records of TV serial production and popularity in India. Her most famous television venture has been "Kyunki Saas Bhi Kabhi Bahu Thi" which began in 2000 and is still leading the TRP ratings in India. Her other famous serials include "Kahaani Ghar Ghar Ki", "Kahiin To Hoga", "Kavyanjali", "Kyaa Hoga Nimmo Kaa", "Kasamh Se", "Kahin Kisii Roz", "Kasautii Zindagi Kay", "Kkusum", "Kutumb", "Kalash", and "Kundali".

For her entrepreneurial skills and achievements Ekta Kapoor was awarded with Ernst & Young (E&Y) Startup Entrepreneur Of The Year award in 2001.