Ruskin Bond is an Indian author of British origin. He is known for his contributions to children's literature. Know more about his life & works in this brief biography.
Home : Indian Literature : Indian English Literature : Authors : Ruskin Bond

Better perceived as the Indian 'William Wordsworth', Ruskin Bond was born in Kasauli in the then Punjab Province in the year 1934. Born to a first generation British migrant, Bond spent most of his childhood in amidst Himalayas. He was brought up at different places that included Jamnagar, Dehradun and Shimla. As customary in that period he went to England for his primary studies. Although Bond was studying in England, his mind rested in India. He had forged an intimate relationship with the Himalayas and longed for it. He is very quite by nature and stays away from the attention of the media in a small hill station in India and when asked once how he feel about living in India he said that it was stressful in practical sense as compared to England but at the end of the day India is home to him. To know more about Bond, continue reading this insightful biography on him.

Personal Life
Bond was born to Edith Clerke and Aubrey Bond. Edith Clerke was working with the Royal Air Force that time. At the age of 4, Bond's mother Aubrey Bond remarried a Punjabi-Hindu called Hari and bond wen to live with his new father, spending his childhood in Jamnagar and Shimla. From the age of 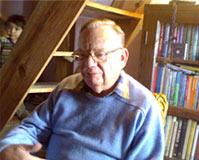 ten, for a few years, Bond went to live with his grandmother in Dehradun, after the sudden death of his father due to malaria. He did most of his schooling from the Bishop Cotton School, Shimla. During this time, he won many accolades in writing like the Irwin Divinity Prize and the Hailey Literature Prize.

Major Work
Writing Journey: Bond started displaying his literary talent in England. He wrote his first novel named Room on the Roof when he was all of 17 years. It was a semi-autobiographical story on the life of an orphaned Anglo-Indian boy, reflecting parts of his own life. The book made him win prestigious John Llewellyn Rhys Prize that is awarded to British Commonwealth Writers who are under the age of 30. The book was primarily based in and around Himalayas and was successful in capturing its beauty and ethos in a manner that was never tried before. Its sequel named Vagrants in the Valley followed it. Riding on the success of these two novels, Ruskin took the journey back home.

Ruskin Bond has now been writing for more than 5 decades. He has stressed more on the local elements of Himalayas in his writings. His writing style is distinct in a way that it tries to make reader understand the landscape and ethos through carefully mastered words. His writings have won him both tremendous critical acclaim as well as a long list of fans throughout the literary world. Replete with unassuming humor and quiet wisdom, his stories manifest a deep love for nature and people. His mesmerizing descriptions about the flora and fauna of Himalayas cannot be missed in his 100 something short stories, essays, novels, and more than thirty books of children that he has written.

Inspiration: The inspiration of his work has always been the hill stations at the foothills of the Himalayas. It was where he spent most of his childhood. Some of his novellas when he was young mirrored the kind of life and experiences he had when he was living in Dehra Dun. He lived there in a small rented along some of his friends. His autobiographical work called Rain in the Mountains majorly includes his life spent in Mussorie. The book called The Room on the Roof was written when he was merely 17 and it included his experiences when he was staying in England and craved to come back to India. It also has a lot of information about how his parents were and his relationship with them. It was after the publication of this book that he finally decided to make writing his profession. It was in England that he was trying to find a publisher for his book and he struggled to get one. The book also has a clear description of his journey to taking up of writing seriously in his life.

Accolades
His works has inspired several generations of writers, authors and scriptwriters. His novel named The Flight of Pigeons has been adapted into the acclaimed Merchant Ivory film Junoon. Another less known novel named The Room on the Roof has been adapted in to a BBC produced TV series. Nevertheless his greatest achievement comes from the fact that several of his short stories from his collections have been incorporated in the school curriculum all over India. It includes jewels such as The Night Train at Deoli, Time Stops at Shamli and Our Trees Still Grow in Dehra. In spite of all these successes, Bond can be concluded today as a media-shy and reclusive literary genius. He spends his days with his adopted family at a place close to Dehradun. He received the Sahitya Akademi Award for English writing in India for Our Trees Still grows in Dehra in 1992. He has also been conferred with Padma Shri, one of the most prestigious civil awards in India.