Sarojini Naidu was born Sarojini Chattopadhyay in Hyderabad on February 13, 1879. She was the eldest sibling of a comparatively large family that was educated in England. Her father, Agorenath Chattophadhyay, received a doctorate in Science from the Edinburgh University. He was the founder and administrator of the Hyderabad College which is now known as Nizam's College of Hyderabad. Naidu's mother, Barada Sundari Devi, was also a poetess and used to write poetry in Bengali language. One of her brothers, Harindranath, was also a poet and an actor. Naidu herself was proficient in languages like Urdu, Persian, English, Telugu, Bengali, etc. She passed her matriculation at the tender age of 12 from the then Madras University and acclaimed national fame. To know more about Naidu, continue reading this insightful biography on her.

Personal Life
Sarojini's father always wanted to see her as a mathematician or a scientist but Sarojini's heart was set on poetry. When one day, she was practicing mathematics and was trying to solve an algebra problem and when got tired of not being able to solve it she took a break and wrote her first poetry instead. This poetry was a 1300 lines long poem called the Lady of the Lake. When her father noticed that Sarojini was more interested in poetry and literature than science or mathematics, he extended his full support to her. 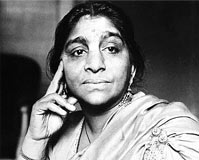 With encouragement from her father's side, Sarojini wrote a play in Persian language called Maher Muneer. It was on the basis of this play, which was also appreciated by the Nawab of Hyderabad himself, that Sarojini got a scholarship to study in England from her college and she got an admission in King's College, London, England.

At the young age of 16, Sarojini travelled abroad to be a part of King's College London and Girton College, Cambridge. It was during this time that Sarojini met an esteemed laureate called Edmond Gosse. Gosse encouraged Naidu to use more of Indian scenarios in her poetry, like: Indian mountains, rivers, temples, etc.

Her early life was full of struggle. She fell in love with Dr. Govinduraju Naidu who was not a Brahmin as she was. This led to opposition from both sides. She went to England for her studies on scholarship much against her will. She returned to Hyderabad in September 1898 and married Dr. Naidu. Although it was an inter caste marriage and inter caste marriages during that time in India were not allowed and were looked down upon by the society, Sarojini's father eventually got his daughter married to Dr. Naidu without caring about the society, as he was of progressive and much modern in his thinking.

Major Work
Persuasion Of Poetry: Though she went to England much against her will but it was here that her poetic soul got liberated. It was here only that she met Arthur Simons, a poet and critic. The struck chord in the very first meeting and kept on corresponding even after her return to India. Simons persuaded her to publish some of her poems. She published her first collection of poems in 1905 under the title Golden Threshold. The book sold like hot cakes both among natives as well as among the Indian Diasporas. Riding on the success, she published two other collections of poems namely The Bird of Time and The Broken Wings. In 1918, Feast of Youth was published. Later, The Magic Tree, The Wizard Mask and A Treasury of Poems were published. It is said that people of such caliber as Rabindra Nath Tagore and Jawaharlal Nehru were among the thousands of admirers of her work. Her works were characterized by their contents that were though English in wording but had an Indian soul.

Politics: It was Shree Gopal Krishna Gokhale who encouraged Sarojini to write poetry on the ongoing freedom struggle of India and inspire people to take participation in it by reviving their patriotic spirit. And then in 1916, she met Mahatma Gandhi, and she totally directed her energy to the fight for freedom. The independence of India became the heart and soul of her work and most of her poems that were composed during that period reflected hope and aspirations of common Indians who were marred by slavery. She was responsible for awakening the women of India. She brought them out of the kitchen and was successful in reestablishing self-esteem, among the women in India. In 1925, she chaired the summit of Congress in Kanpur. And in 1930, when Gandhi Ji was arrested for a protest, she took the helms of his movement. In 1931, she participated in the Round Table Summit, along with Mahatma Gandhi. In 1942, she was arrested during the "Quit India" protest and stayed in jail for 21 months.

Death
After independence she became the Governor of Uttar Pradesh. She was the first woman governor. She passed away on March 2, 1949.