Amitav Ghosh is a US based Indian author, famous for his novel Sea of Poppies. Know more about his life & works in this brief biography.
Home : Indian Literature : Indian English Literature : Authors : Amitav Ghosh 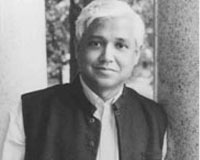 Amitav Ghosh, a pioneer of English literature in India, was born in Calcutta (Now Kolkata) in the year 1956. Amitav Ghosh was raised and educated at the same time in as different locations as Bangladesh, Sri Lanka, Iran, Egypt, India and the United Kingdom. His father was a retired officer of pre-independence Indian Army. He completed his high school education from The Doon School and his bachelors from St. Stephen's College, Delhi University, Delhi. He completed his higher studies in England where he went on to receive his Ph.D. in social anthropology from Oxford University. After completing his Ph.D. he decided to pursue his career in writing. He worked as a journalist for the first time with the Indian Express newspaper, Delhi. To know more about Ghosh, continue reading this insightful biography on him.

Personal Life
He resides in the New York City and is married with two children to Deborah Baker, a senior editor at the publishing house called the Little Brown Company. She is also author of the biography In Extremis: The Life of Laura Riding. For some years, Ghosh worked as a professor in Comparative Literature at the Queens College, City University of the New York City. He has also consistently been a visiting faculty to the English department of the Harvard University. For his distinguished contribution to the literary world, Amitav Ghosh was elected as a Fellow of the Royal Literature Society. The Government of India conferred Amitav Ghosh with Padma Bhushan in 2007.

Major Work
The fictions of Amitav Ghosh are marked by extreme themes that go side by side with post-colonialism. Nevertheless it will be nothing short of insult, for an author of his repute, to say that his works are formulaic. It is practically impossible to label his works. It can be added here that his topics are much more unique and personal. The appeal of Amitav' s work lies in his ability to weave "Indo-nostalgic" elements into more serious, heavier themes.

Amitav Ghosh is acclaimed in the literary world for his works on fiction, travel writing and journalism. His long list of accomplishment includes books like The Circle of Reason, The Shadow Lines, In an Antique Land and Dancing in Cambodia. His previous work, The Glass Palace, was an international bestseller that sold more than a half-million copies in Britain. Recently published there, The Hungry Tide has been sold for translation in twelve foreign countries and is also a bestseller abroad. Among awards, Ghosh has won France's Prix Medici Etranger, India's prestigious Sahitya Akademi Award, the Arthur C. Clarke Award, and the Pushcart Prize.

Notable Novels
The Glass Palace is amongst his most famous works. This novella with a historical background is set in the rich cultures of Burma, Bengal, Indian and Malaya. The novel spans from the times of World War II to the modern times. This novel very emotionally touches the economic issues in Burma and India, their unstable political situations affecting the personal lives of people living in these nations. Also, focusing on how modernity sweeps away the age old culture and authenticity, bringing with itself the new world expression and thoughts. The Glass Palace won the best book category of Commonwealth Writers' Prize 2001. This book was translated in more than 25 languages and won the New York Times Notable Books' award in 2001

Another popular work by Amitav Ghosh is Sea of Poppies, shortlisted novella for the Man Booker prize award. It is a part of his Ibis trilogy. The second part of the trilogy is River of Smoke and the third part is still in the writing process. This book also has a historical tone to it and is set in the era before the onset of Opium Wars. The novel's story is situated on the holy banks of Ganges in Bengal. The whole novella is the analogy of the holiness of Ganges with the Egyptian river Nile. The main characters of the novel are compared to poppy seeds, spreading through fields, growing strongly in numbers but as a single entity each seed is unsure about its destiny. Sea of Poppies received the Vodafone Crossword Book Award (fiction) 2008 and it was also one of the nominees for the Booker Prize 2008. This novel bagged the British Book Design and Production Award 2008.


His very recent novella and the second part of his Ibis trilogy, River of Smoke, was shortlisted for The Hindu Literary Prize award and DSC Prize for South Asian Literature. It was also longlisted for the Man Asian Literary Prize 2011. The story of River of Smoke is on the changing thinking patterns and ways of living of Indian migrants in Mauritius. This novel is vast in the sense of its characters and their geographical and cultural backgrounds. It revolves around the lives of small traders' trading with the local Chinese traders in the town of Fanqui in Mauritius, around the time the first Opium War broke out.