Born Eric Arthur Blair to an Anglo-Indian parent in the year 1903, George Orwell had a deep connection with India. It was in a barn in some sleepy village of Motihari district of the then Bihar that George Orwell had first tryst with the human world. His father, a famous Indigo planter of Champaran, wanted him to sail for England to study. At a very young age Orwell attended a small school in Henley. He was then sent to study under the headmaster of England's most famous and successful preparatory school called the St Cyprian's School in Eastbourne, Sussex. He got an admission in this preparatory school on the basis of a scholarship, which meant that his parents only paid half of the actual fees. Then he continued his education at Wellington and from there moved to Eton, where he was a King's Scholar from 1917 to 1921. To know more about Orwell, continue reading this insightful biography on him.

Personal Life
On the account of his personal life, Orwell has mentioned that he had comparatively enjoyed his time at Eton as it provided its students some amount of freedom and was not as strict as the other institutes he had attended before. It is claimed that after arriving at Eton, Orwell lost his seriousness towards studies and was counted as one of the poor students. He was seen as a rebel by some of the teachers in authority at Eton. It is reported that during his time in Eton, Orwell made many British Intellectual friends.

Major Work
Burma: After completing his stint with studies at Eton, Eric joined the Indian Imperial Police in Burma. He took this decision because his family could not afford to get him admitted to a university and he could not, also, get a scholarship to support his tuition fees. He 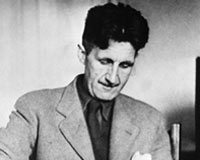 returned to England from Burma disillusioned from Imperialism in the year of 1928. It was after this experience that he took his pen name 'George Orwell'. This name symbolized his love for England's countryside -- George is the patron saint of England and Orwell was his most favorite river in Suffolk. A typical description of Orwell's life would be -- living in the constant struggle of poverty, facing the dread of occasional homelessness and doing temporary work for survival. There was a time when he finally found work as a full time teacher at a school but he had to leave it due to his ill-health and he was forced to work as a part-time assistant in a Hampstead based book shop selling secondhand books. He wrote some of his splendid works such as Down and Out in Paris and London (1933), Burmese Days (1934), A Clergyman's Daughter (1935), A Hanging (1931) and Shooting an Elephant (1936) among others, during this time. This was the time when George Orwell felt early moorings for Communism.

Spanish Civil War: When Spanish Civil war broke out, Orwell decided to participate in the war from the side of Republicans against the Nationalist mutiny. He joined the non-stalinist far-left POUM as an infantryman, but it was during this war that he got disillusioned from the Stalinist brand of communism. The stage was set for some of his best works. It started with Homage to Catalonia in the year 1938 and then came the very famous Animal Farm. During the time of World War II, Orwell became a member of the Home Guard and worked for BBC. He got the task to handle the work of BBC Eastern Service, on the programmes made to gain the confidence of India and other East Asian countries for British participation in the war.

Animal Farm got published in the year 1945 and took the literary world by storm. In this work, George Orwell criticized the Stalinist brand of Communism and proved its vulnerability towards corruption and despotism. With quotes such as "…all men are equal but some are more equal than others…" Orwell had arrived. In the year 1949 Orwell wrote his magnum opus 1984. The novel feared the American dominion in coming centuries and its ultimate transition in to a totalitarian regime flourishing behind the veil of democracy. It is unbelievable that many of his predictions stand true as of today.

George Orwell spent last years of his life fighting against Zionism and the sinister designs of Britain and US in the formation of Israel. He championed the cause of Arabs and Palestinians and severely criticized the moves of west in strangulating human rights of Palestinians. He resigned from 'The Tribune' that was controlled by Zionist lobby and championed the cause of Israel. All his life, George Orwell stood against traits like Fascism, Totalitarianism, Zionism, and most of his works reflected his ethos.

Death
This great literary figure finally closed his eyes in 1949 in London where he was later buried according to Anglican rites. He was 46 when he died and he died of tuberculosis. He had fought with this disease for three years in his life.