Joseph Rudyard Kipling was born in 1865 at Bombay to Lockwood Kipling. His father was a sculptor and the principal of the prestigious Jeejabhoy School of Architecture at Bombay. Kipling and his three year old sister, Alice, were sent to England as it was customary in those days. They were sent to Southsea, England to be educated. While there, they lodged with a couple who used to board children of British nationals serving in India. It was approximately six years that Kipling and his sister stayed with this couple. Later in his autobiographical account, Kipling mentioned his stay in Southsea with this couple with a certain amount of dejection as he remembered getting neglected and bullied at the hands of this couple. But Kipling did have family in England whom he and his sister visited during Christmas times. To know more about Kipling, continue to reading this biography.

Personal Life
It was in the year 1878 that Kipling took an admission at The United Services College, Westward Ho! in Devon. This school used to prepare young boys for the British Army. This was the phase in his life that provided him the base material for his book Stalky & Co. in 1899. This was also the time when Kipling met and fell in love with Florence Garrad, a fellow lodger of his sister Alice. It was by the end of his schooling at the University Services College that it was settled on that he does not have enough academic credentials to be a part of the Oxford University on a scholarship. Therefore, after completing his schooling, Kipling returned to India; then in 1882 when Rudyard Kipling joined Civil and Military Gazette at Lahore as a journalist.

Major Work
His editor by the name of Dr. Wheelers encouraged him to write articles and poems that first appeared in the newspaper 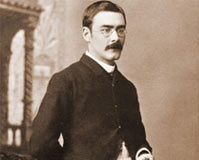 When he was sure of his popularity in India, Kipling tried to pursue his career in writing in England. His plans hit a roadblock when his very first novel, based on his true-life encounters, by the name of The Light That Failed (1890) failed miserably. He was shocked to death but kept calm. His next ventures such as Barrack-Room Ballads (1892) and Jungle Book (1894) established Kipling' s reputation however. Jungle Book went on to become one of the bestsellers in the history of English literature. However, some people find his work full of preconceived notions and typecasting. Due to his propagation of White Man's Burden those hostile to imperialism accused Kipling of jingoism.

South African Expedition: On the outbreak of the Boer War, Kipling traveled to South Africa. In South Africa, Rudyard Kipling worked with civil organizations that helped wounded soldiers. He even went on to produce a newspaper for the troops that propagated the infallibility of the British race. By the time he returned to England, Kipling was being described as the Laureate of the Empire.

In 1901 Kipling published the best-selling novel, Kim. Riding on the success of Kim, over the next few years Kipling concentrated on writing children's books such as Just So Stories (1902), Puck of Pook's Hill (1906) and Rewards and Fairies (1910). After the outbreak of First World War in 1914, the War Propaganda Bureau arranged for Kipling to tour of Britain's army camps. The visits resulted in the publication of The New Army (1914). He also visited the Western Front and wrote about his experiences in France at War (1915).

Accolades
Kipling inspired many writers like Edmund Candler, Poul Anderson, Randall Jarrell, etc. The Jungle Book written by Kipling is popular even now and has been adapted into many movies. The first ever movie on Jungle Book was produced by the Walt Disney Company. Some of his short stories were produced into short films by BBC in 1964. Recently, in 2012 a vanishing species of crocodile is named in his honor as Goniopholis Kiplingi, because of his love and interest for natural science.

Son's Demise & His Own Death
Soon after the outbreak of the First World War, Kipling' s only son, John attempted to enlist in the British Army. Kipling used his influence to get his seventeen-year-old son enlisted but he died in the Battle of Loos. He never really got over from the loss of his son and for many years suffered from depression. This was reflected in the somber mood of most of his later writing including his autobiography by the name Something of Myself that was published in 1934.

Kipling continued to write even during the last days of his life but towards the end his writing became slow and lost its usual vigor. He died in the year 1936 because of perforated duodenal ulcer. He was 70 years old when he expired. He died a few days before the death of George V.