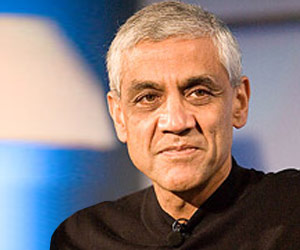 Achievement: One of the co-founders of Sun Microsystems.

Vinod Khosla is an epitome of Indian success story at Silicon Valley. He is a venture capitalist and is better known as one of the co-founders of Sun Microsystems.

Vinod Khosla came from an ordinary middle class background. His father was in army. At the age of 16, Vinod Khosla read about the founding of Intel. This motivated him to nurture dreams of starting his own technology company. At the age of 20, after graduating in Electrical Engineering from IIT Delhi, Vinod Khosla started a soy milk company to cater to those people in India who did not have refrigerators. But his venture failed.

Vinod Khosla went to the US and did his Masters in Biomedical Engineering from Carnegie-Mellon University. His entrepreneurial ambitions attracted him to Silicon Valley and subsequently he did his MBA from Stanford University in 1980.

After graduating from Stanford, Vinod Khosla founded Daisy Systems with two other founders. Daisy Systems was the first significant computer aided design system for electrical engineers. The company went on to make huge profits but driven by the frustration of having to design the computer hardware on which the Daisy software needed to be built, Vinod Khosla left the company.

Vinod Khosla also challenged Intel's monopoly by developing Nexgen/AMD. He also conceptualized the idea and business plan for Juniper to take on Cisco's dominance of the router market. Vinod Khosla is also one of the founding fathers of The Indus Entrepreneur (TiE), a not-for-profit global network of entrepreneurs and professionals founded in 1992. In 2004, he formed khoslaventures to fund knowledgeable entrepreneurs in their new "social impact" ventures.

Vinod Khosla has a keen interest in nascent technologies that can have a beneficial effect and economic impact on society. Presently, he is looking into practicality of the use of ethanol as a gasoline substitute.