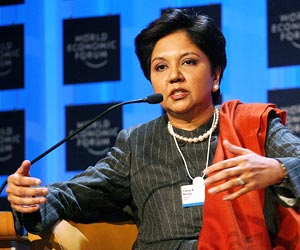 Achievements: CEO of PepsiCo; Ranked No.4 on Forbes magazine's annual survey of the 100 most powerful women in the world.

Indra Nooyi is the newly appointed CEO of PepsiCo-the world's second-largest soft drink maker. She joins the select band of women who head Fortune 500 companies. Presently, there are only 10 Fortune 500 companies that are run by women, and Indra Nooyi is the 11th to break into the top echelons of power. Prior to becoming CEO, Indra Nooyi was President, Chief Financial Officer and a member of the Board of Directors of PepsiCo Inc.

Indra Nooyi spent her childhood in Chennai. Her father worked at the State Bank of Hyderabad and her grandfather was a district judge. She did her BSc. in Chemistry from Madras Christian College and subsequently earned a Master's Degree in Finance and Marketing from IIM Calcutta. Indra Nooyi also holds a Master's Degree in Public and Private management from the Yale School of Management.

Before joining PepsiCo in 1994, Indra Nooyi was Senior Vice President of Strategy and Strategic Marketing for Asea Brown Boveri, and Vice President and Director of Corporate Strategy and Planning at Motorola. She also had stints at Mettur Beardsell and Johnson & Johnson. At PepsiCo, Indra Nooyi played key roles in the Tricon spin-off, the purchase of Tropicana, the public offering of Pepsi Cola bottling group and the merger with Quaker Foods.

Indra Nooyi has been ranked No.4 on Forbes magazine's annual survey of the 100 most powerful women in the world.