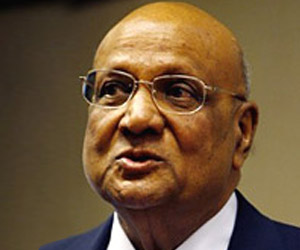 Lord Swaraj Paul is one of the most famous Indian origin entrepreneurs, based in Britain. He is the founder of multinational company Caparo-the UK-based steel and engineering group.

Swraj Paul was born in Jalandhar in 1931. His father ran a small foundry and used to make steel buckets and farming equipments. Swaraj Paul did his graduation from the Punjab University and subsequently obtained a Master's degree in mechanical engineering from the Massachusetts Institute of Technology (MIT) in the US. After his return to India, Swaraj Paul joined the Apeejay Group, which his father had founded. Destiny took him to London in 1966, where he went for his daughter's Leukemia treatment, and stayed there forever.

Swaraj Paul started his business in Britain in 1968. After acquiring one steel unit, he went on to acquire more units and founded the Caparo group in the year 1978. Caparo developed into one of the leading producers of welded steel tube and spiral-welded pipe in the UK. In 1996, Swaraj Paul stepped down from the management of the Caparo group and handed over the reins to his three sons.

Lord Swaraj Paul has won several honors and awards. He was knighted by the British Queen in the year 1978 and became the Lord Paul of Marylebone and a member of the House of Lords. Lord Swraj Paul wrote the biography of Indira Gandhi and was awarded the Padma Bhushan in 1983. He was bestowed with the Pro-Chancellorship of the Thames University in 1998.