One of the greatest figures of wisdom and knowledge in the Indian history is Chanakya. He is estimated to have lived from 350 - 283 B.C. Chanakya is touted as the "Pioneer Economist of India". Chanakya was the adviser and Prime Minister of Emperor Chandragupta. Chanakya was a professor at the University of Takshila (located in present day Pakistan) and was an expert in commerce, warfare, economics, etc. His famous works include Chanakya Neeti, Arthashastra and Neetishastra. Read this biography of Kautilya that covers his interesting life history.

Chanakya is also known by the name of Kautilya and Vishnugupta as is mentioned in his text. His famous work called Arthashastra is a classic example of statecraft and politics and is read in Europe even today. It basically consists of the principles of politics and how the state works. An able ruler has to be a ruthless leader to make sure that the state works smoothly and efficiently. The legends associated with Chanakya are very interesting and provide a testimony of his greatness. 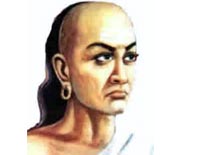