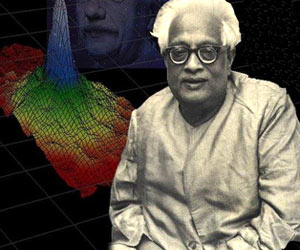 Born: January 1, 1894
Died: February 4, 1974
Achievements: Famous for "Bose-Einstein Theory". A subatomic particle Boson has been named after him. Honored with "Padma Bhushan".

Satyendra Nath Bose was an outstanding Indian physicist. He is known for his work in Quantum Physics. He is famous for "Bose-Einstein Theory" and a kind of particle in atom has been named after his name as Boson.

Satyendra Nath Bose had his schooling from Hindu High School in Calcutta. He was a brilliant student. He passed the ISc in 1911 from the Presidency College, Calcutta securing the first position. Satyendra Nath Bose did his BSc in Mathematics from the Presidency College in 1913 and MSc in Mixed Mathematics in 1915 from the same college. He topped the university in BSc. and MSc. Exams.

In 1916, the Calcutta University started M.Sc. classes in Modern Mathematics and Modern Physics. S.N. Bose started his career in 1916 as a Lecturer in Physics in Calcutta University. He served here from 1916 to 1921. He joined the newly established Dhaka University in 1921 as a Reader in the Department of Physics. In 1924, Satyendra Nath Bose published an article titled Max Planck's Law and Light Quantum Hypothesis. This article was sent to Albert Einstein. Einstein appreciated it so much that he himself translated it into German and sent it for publication to a famous periodical in Germany - 'Zeitschrift fur Physik'. The hypothesis received a great attention and was highly appreciated by the scientists. It became famous to the scientists as 'Bose-Einstein Theory'.

In 1926, Satyendra Nath Bose became a Professor of Physics in Dhaka University. Though he had not completed his doctorate till then, he was appointed as professor on Einstein's recommendation. In 1929 Satyendranath Bose was elected chairman of the Physics of the Indian Science Congress and in 1944 elected full chairman of the Congress. In 1945, he was appointed as Khaira Professor of Physics in Calcutta University. He retired from Calcutta University in 1956. The University honored him on his retirement by appointing him as Emeritus Professor. Later he became the Vice Chancellor of the Viswabharati University. In 1958, he was made a Fellow of the Royal Society, London.

Satyendra Nath Bose was honored with 'Padmabhusan' by the Indian Government in recognition of his outstanding achievement. He died in Kolkata on February 4, 1974.