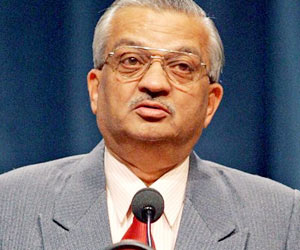 Born - 11 November 1943
Achievements - Dr Anil Kakodkar is a famous Indian nuclear scientist. Currently, he's the chairman of the Atomic Energy Commission of India (AECI) and the Secretary to the Government of India, Department of Atomic Energy. He was also the director of the Bhabha Atomic Research Centre at Trombay.

Dr Anil Kakodkar is a very distinguished nuclear scientist of India. He is presently the chairman of the Atomic Energy Commission of India (AECI) as well as the Secretary to the Government of India, Department of Atomic Energy. He was the director of the Bhabha Atomic Research Centre at Trombay from the year 1996-2000 before being granted the opportunity of leading India's nuclear programme. Read on more about the biography of Anil Kakodkar.

Anil Kakodkar was born on 11 November 1943 in the Barawani village located in the present day Indian state of Madhya Pradesh. He's the son of Mrs Kamala Kakodkar & Mr. P. Kakodkar, both of whom happen to be Gandhian freedom fighters. His early education happened here and at Khargoan. After this, Anil Kakodkar went away to Bombay to pursue his post-matriculation studies. He graduated from the Ruparel College there.

Kakodkar then joined VJTI in Bombay University in 1963 to obtain a degree in Mechanical Engineering. In the year 1964, Anil Kakodkar joined the Bhabha Atomic Research Centre (BARC). He also notched a masters degree in experimental stress analysis from the University of Nottingham in the year 1969. The life history of Anil Kakodkar's career as nuclear scientist further saw him join the Reactor Engineering Division of the BARC.

Anil Kakodkar also has the credit of being a member of the core team of architects of India's Peaceful Nuclear Tests that were conducted during the years 1974 and 1998. He also led the indigenous development of the country's Pressurised Heavy Water Reactor Technology. Anil Kakodkar's efforts in the rehabilitation of the two reactors at Kalpakkam and the first unit at Rawatbhatta is noteworthy as it were about to close down.

In the year 1996, Anil Kakodkar became the youngest Director of the BARC after Homi Bhabha himself. From the year 2000 onwards, he has been leading the Atomic Energy Commission of India and playing secretary to the Department of Atomic Energy. Dr Anil Kakodkar has been playing a crucial part in demanding sovereignty for India's nuclear tests. Infact, he is known for being a strong advocate of India's self-reliance by employing Thorium as a fuel for nuclear energy.