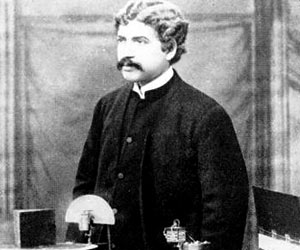 Born: November 30, 1858
Died: November 23, 1937
Achievements: He was the first to prove that plants too have feelings. He invented wireless telegraphy a year before Marconi patented his invention.

Jagdish Chandra Bose was an eminent Indian scientist. He was the first to prove that plants and metals too have feelings.

In 1880, Jagdishchandra Bose went to England. He studied medicine at London University, England, for a year but gave it up because of his own ill health. Within a year he moved to Cambridge to take up a scholarship to study Natural Science at Christ's College Cambridge. In 1885, he returned from abroad with a B.Sc. degree and Natural Science Tripos (a special course of study at Cambridge).

After his return Jagadish Chandra Bose, was offered lectureship at Presidency College, Calcutta on a salary half that of his English colleagues. He accepted the job but refused to draw his salary in protest. After three years the college ultimately conceded his demand and Jagdish Chandra Bose was paid full salary from the date he joined the college. As a teacher Jagdish Chandra Bose was very popular and engaged the interest of his students by making extensive use of scientific demonstrations. Many of his students at the Presidency College were destined to become famous in their own right. These included Satyendra Nath Bose and Meghnad Saha.

In 1894, Jagadish Chandra Bose decided to devote himself to pure research. He converted a small enclosure adjoining a bathroom in the Presidency College into a laboratory. He carried out experiments involving refraction, diffraction and polarization. It would not be wrong to call him as the inventor of wireless telegraphy. In 1895, a year before Guglielmo Marconi patented this invention, he had demonstrated its functioning in public.

Jagdish Chandra Bose later switched from physics to the study of metals and then plants. He fabricated a highly sensitive "coherer", the device that detects radio waves. He found that the sensitivity of the coherer decreased when it was used continuously for a long period and it regained its sensitivity when he gave the device some rest. He thus concluded that metals have feelings and memory.

Jagdish Chandra Bose showed experimentally plants too have life. He invented an instrument to record the pulse of plants and connected it to a plant. The plant, with its roots, was carefully picked up and dipped up to its stem in a vessel containing bromide, a poison. The plant's pulse beat, which the instrument recorded as a steady to-and-fro movement like the pendulum of a clock, began to grow unsteady. Soon, the spot vibrated violently and then came to a sudden stop. The plant had died because of poison.

Although Jagdish Chandra Bose did invaluable work in Science, his work was recognized in the country only when the Western world recognized its importance. He founded the Bose Institute at Calcutta, devoted mainly to the study of plants. Today, the Institute carries research on other fields too.