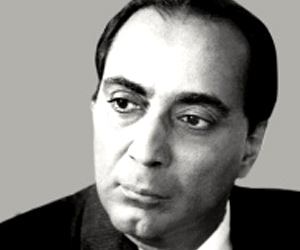 Born: October 30, 1909
Died: January 24, 1966
Achievements: Founded Tata Institute of Fundamental Research; was the first chairman of India's Atomic Energy Commission; was chairman of the first United Nations Conference on the Peaceful Uses of Atomic Energy, held in Geneva in 1955.

Homi Bhabha, whose full name was Homi Jehnagir Bhabha, was a famous Indian atomic scientist. In Independent India, Homi Jehnagir Bhabha, with the support of Jawaharlal Nehru, laid the foundation of a scientific establishment and was responsible for the creation of two premier institutions, Tata Institute of Fundamental Research and Bhabha Atomic Research Centre. Homi Bhabha was the first chairman of India's Atomic Energy Commission.

Homi Jehangir Bhabha was born on October 30, 1909, in Bombay in a rich Parsi family. After graduating from Elphinstone College and the Royal Institute of Science in Bombay, he went to Cambridge University. He received his doctorate in 1934. During this period he worked with Niels Bohr on the studies that led to quantum theory. Homi Jehnagir Bhabha also worked with Walter Heitler on the cascade theory of electron showers, which was of great importance for the understanding of cosmic radiation. He did significant work in identifying the meson.

Apart from being a great scientist, Homi Bhabha, was also a skilled administrator. After independence he received the blessings of Jawaharlal Nehru for peaceful development of atomic energy. He established the Atomic Energy Commission of India in 1948. Under his guidance Indian scientists worked on the development of atomic energy, and the first atomic reactor in Asia went into operation at Trombay, near Bombay, in 1956.

Homi Bhabha was chairman of the first United Nations Conference on the Peaceful Uses of Atomic Energy, held in Geneva in 1955. He advocated international control of nuclear energy and the outlawing of atomic bombs by all countries. He wanted nuclear energy to be used for alleviating poverty and misery of people.

Homi Bhabha received many honorary degrees from Indian and foreign universities and was a member of numerous scientific societies, including the National Academy of Sciences in the United States. He also authored many articles on quantum theory and cosmic rays. Homi Bhabha died in an aeroplane crash in Switzerland on January 24, 1966.